Bringing families into the fold 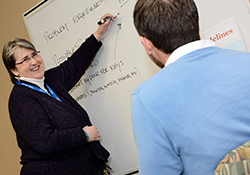 For Veterans suffering from mild traumatic brain injury, or mTBI, adjusting to life back home can be difficult—not just for themselves, but for their families as well. "All the post-deployment challenges are already there," says Dr. Deborah Perlick of the VA Mental Illness Research, Education and Clinical Center in the Bronx, New York, and the Icahn School of Medicine at Mount Sinai. "Now add to that the cognitive challenges of TBI. They are forgetful. They have organizational challenges. They forget the milk or to pick up the kids." That, says Perlick, leads to unhealthy conflict within Veterans' families.

Perlick and a team of VA researchers spent nine months working with Veterans and their families as part of a study on TBI treatment options. Some 22 percent of service members wounded in Iraq and Afghanistan are estimated to suffer TBI.

"One of the main issues," says Perlick "is that TBI, especially mild cases, which are most prevalent, is hard to recognize. You have Veterans without a diagnosis and they're frustrated and angry at their own disorganization or forgetfulness. Due to the undiagnosed cognitive dysfunction, they may appear to have personality changes. Their partners sometimes feel that they're not the same person."

Study included groups in Durham and the Bronx

For the study, 11 Veterans and their family members were treated in three groups—two in Durham, N.C., and one in the Bronx, to learn about mTBI, problem-solve, and establish life goals. Participants were surveyed about their problems and explored their common struggles and relationships together.

"Cognitive functioning absolutely impacts relationships," says Dr. Kristy Straits-Troster, who headed the Durham groups. "That decreased ability to multitask is difficult, particularly for individuals who used to be able to function at a high capacity. So for former military leaders, not being able to work full time, or getting fatigued easily or confused, can be a problem. Family members emerge with hurt feelings. They don't understand what happened to their spouse or family member."

One thing both Perlick and Straits-Troster experienced was that the Veterans in their study had been hesitant to share their experiences or detail their injuries with their family members, particularly spouses. "These are people who are accustomed to seeing themselves as the head of the household," said Straits-Troster, "and maybe they want to protect the family from their experiences or they don't want to admit that something is wrong."

The presence of other Veterans in the groups seemed to allay that fear, according to the results of the study, which were published in the June 2013 issue of the journal Psychiatric Services. "It made it easier for them to share their experiences with their spouses and just to talk about what it was like for them. They know the other Veterans will understand because they've walked in those same boots," says Perlick, who described the sessions as "safe places." "They felt they could talk about what they were going through and no one is going to judge them."

Another major issue, and one of the reasons researchers say the participants responded so well to the treatment, was that it showed them they weren't alone.

An 'opportunity for more enduring care'

"Many Veterans and their family members feel like they're the only ones going through this," says Straits-Troster. "This is a model for integrating the family into patient care. We're seeing these patients in our clinics, individually. We're giving them information and then they're going back home to try to explain it to a family member who might never get their own questions answered. And we're asking an injured patient to do this."

Straits-Troster shares that some family members told her this was the first time they truly understood what was wrong with their spouse. "That creates an opportunity for more enduring care," she says. "It may also translate into more assertiveness in Veterans' care."

VA has already funded an expansion of the study to two other sites, in addition to the Bronx: the New York Harbor VA Healthcare System, and the Baltimore VA Medical Center. The researchers hope implementation won't be far behind. Perlick is hopeful that if the multifamily group treatment proves effective in the larger randomized controlled trial, there may come a day when Veterans and their family members can be referred to group counseling through a variety of channels, and not just for TBI. The researchers suggest that multifamily group treatment might be just as helpful for Veterans suffering from posttraumatic stress disorder.

Despite the success, Perlick maintains that full recovery can be difficult for everyone involved. "Its an uphill battle," she says, "and there really isn't another treatment option out there for family members. But these folks are young, resilient, and receptive to our efforts."

The Veterans, Perlick says, may be injured, but "with compensatory strategies, they should be able to go to school, get jobs, and have satisfying lives and marriages."