ORD Home » Currents » Spring2014  »  For those with disabilities, healthier weight may be only a phone call awa...

For those with disabilities, healthier weight may be only a phone call away 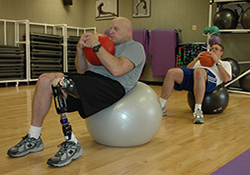 But what are the options for a person who can't stand, let alone crank out pushups or run a 5K? How does someone eat healthy when grocery shopping and cooking dinner are both major challenges?

The answer, says VA researcher Dr. Ben Gerber, may be only a telephone call away.

Gerber, of the Jesse Brown VA Medical Center in Chicago, says regular 30-minute targeted phone calls from a trainer can result in significant weight loss for disabled persons. The finding is from a study Gerber worked on along with Dr. James Rimmer of the University of Alabama at Birmingham (UAB).

Gerber says providers often don't know exactly what to tell disabled patients about exercise. "From a provider's perspective, we might tell a patient to walk 30 minutes a day or to eat a certain kind of diet, but for someone with paraplegia, that recommendation becomes a lot more complicated. There also might be competing health priorities," says Gerber. "Who grocery shops and prepares the meals, mobility limitations, pain, depression—all of that plays a role."

All that is part of why people with disabilities have a 66 percent higher rate of obesity than the general population.

Intrigued by the challenge, the researchers set out to develop a program to make exercise—and weight loss—more practical and attainable for the disabled population.

One call per week

Their study, published in the December 2013 issue of the American Journal of Physical Medical Rehabilitation , involved more than 100 participants, each with a mobility-limiting disability. The conditions included spinal cord injury, multiple sclerosis, spina bifida, cerebral palsy, stroke, and lupus.

The researchers randomly assigned the volunteers to one of three groups. One group received a physical-activity toolkit along with regular calls from coaches who used a Web-based remote coaching tool called POWERS (Personalized Online Weight and Exercise Response System). The software program was developed by Rimmer's group at UAB through funding from the National Institute on Disability and Rehabilitation Research.

For four months, those receiving calls were contacted weekly to develop a plan, monitor progress, and troubleshoot any barriers. The calls dropped to every other week after that. At seven months, the calls came only monthly.

After nine months, those on the POWERS plan had lost, on average, nearly five pounds. Participants who also received nutritional advice lost an additional pound. Meanwhile, in the control group, participants actually gained weight—five to six pounds, on average.

Gerber notes that the approach may be a way to reduce not only weight, but health care costs. "Something like this is relatively low-cost," he says. "We can do health behavior promotion and intervention by telephone. That's an easy, cheap, and accessible mechanism to use." He adds the benefits might be especially applicable in VA, with its large population of Veterans, many in rural areas, who have disabilities and other chronic health conditions.

Work remains. Among other tasks, researchers and clinicians have to develop appropriate weight guidelines for those with certain disabilities. Gerber is working now with Dr. Sherri LaVela of the Hines VA Medical Center on a VA-funded study of weight management among Veterans with spinal cord injuries.

"We're trying to increase the ways we can reach our Veterans," says Gerber. "I think the studies we're doing are showing that people with disabilities can exercise, lose weight, and achieve their goals. Telephone lifestyle coaching is growing in the VA for overweight Veterans. We should also offer services to disabled Veterans that meet their unique needs in weight management."