Study explores use of telehealth for MS patients 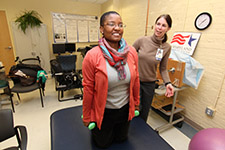 That's the word Raina Groover, 42, uses to describe how she feels on days when her multiple sclerosis symptoms flare up.

"I get tingling, numbness, arthritic symptoms, fatigue. And my brain–we call it MS fog. It's like 'word search,' trying to get the right words to come out."

As with most MS patients, exercise is good medicine for the 42-year-old former U.S. Public Health Service nurse officer, who was diagnosed with the disease in 2010.

She says sticking with an exercise regimen–and getting feedback and support–became easier when she enrolled in a Baltimore VA Medical Center and University of Maryland study aimed at helping people with MS.

The trial, titled "Physical Telerehabilitation in Veterans with Multiple Sclerosis," was launched in 2012 and will wrap up later this year.

As part of the study, Groover had a program loaded on her laptop that served almost like a personal trainer, guiding her through customized stretches and other exercises, with videos and tips. It also enabled her to respond to questions and surveys–for example, about her pain and fatigue–and exchange messages with a physical therapist back at the Baltimore VA.

"Susan [Conroy, the therapist] was very good about tracking my progress," recalls Groover. "If I hadn't logged in for a couple of days, she would send me 'sweet little reminders' to let me know. She'd write things like, "Hey, you're doing great so far! Don't forget to log in and do what you can.'"

The icon that Groover clicked on her laptop activated a Home Automated Telemanagement system. The generic HAT technology was developed some years ago by physician-researcher Dr. Joseph Finkelstein when he was at the University of Maryland. Finkelstein, now at Johns Hopkins University, has used HAT in studies on a number of chronic diseases, from diabetes to emphysema.

"It's a platform that's evolved over the years, and we've been trying to make it work for MS," says Dr. Mitchell Wallin, a neurologist at the Washington, DC, VA Medical Center. He is collaborating on the study with lead investigator Dr. Walter Royal, with the Baltimore VA and the University of Maryland.

The technology used to run off a land line, says Wallin. Now, it's Internet-based. "It's a multicomponent system. It includes the ability to do standardized surveys, ask questions, give patients educational modules, give feedback and messages to patients. It also allows for other kinds of assessments that have become more commonplace with interactive devices–things like digital peak flows [to measure lung air flow], glucometers, scales, where data can be transmitted through a USB port."

Conroy, the physical therapist, programmed Groover's individual regimen into HAT by choosing from a menu of choices–which exercises, at what frequency.

Patient information collected by the system is fed securely to researchers back at the medical center to analyze. One goal of the study is to compare the progress of MS patients who use HAT with that of patients who also have a tailored exercise regimen but are doing it on their own at home, without the benefit of the technology.

In addition, all patients in the study go to the clinic at three and six months for an extensive two-hour evaluation. The work-up tests their balance, gait, range of motion, manual dexterity, cognitive function, physical stamina, and other parameters.

There's little debate among MS specialists that exercise is a powerful elixir for MS.

Royal: "For patients who are having flare-ups, it's common to have, as part of their regimen, some exercise, or a course of physical therapy. This helps speed recovery."

And it's not just during flare-ups, or relapses, that exercise can help.

"People who exercise regularly have significant gains in endurance," says Wallin. "They can actually maintain or improve their power and function."

The exact pathways through which exercise helps people with MS is probably a complex matter, suggests Royal. "There's a lot of interest in brain plasticity–we believe exercise is activating new circuits to allow people to improve their everyday function. Also, it's clear that exercise can lead to the production of certain trophic factors [growth proteins in the brain] that are neuroprotective. And exercise can also probably have a direct impact on the inflammation that's going on in MS. So all of that comes together."

'It keeps me going, keeps me accountable'

But Wallin points out that as helpful as exercise is for people with MS, they tend to face more challenges in being able to stick with a routine.

"Because of the fatigue, there's a lot of disuse and atrophy of muscles," he says. "And the patients tend to not be as mobile, as far as various activities during the day. They may have other functional problems, such as control of movement, that prevent them from doing certain types of exercise. It's often harder for them to use the standard equipment you see at most health clubs. They may not feel as safe."

That was part of the motivation for the study.

"We want to give people an option to do things at home, without all the gym equipment," says Wallin.

Groover, for one, likes the idea. Though she is no longer formally in the study, she still has the HAT modules on her laptop, and uses them to get herself moving.

"The system is very user-friendly and helpful," says the nurse. "It keeps me going and keeps me accountable. I'm grateful for it, because it's something I can do right here in my own home."