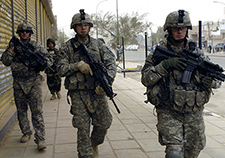 U.S. Army soldiers join Iraqi personnel on a search for IEDs and illegal firearms in Baghdad in 2008. A VA team that combined data from 33 studies published between 2007 and 2013 found an average PTSD prevalence rate of 23 percent among Iraq and Afghanistan Veterans. (Photo by Staff Sgt. Jason T. Bailey/USAF)

U.S. Army soldiers join Iraqi personnel on a search for IEDs and illegal firearms in Baghdad in 2008. A VA team that combined data from 33 studies published between 2007 and 2013 found an average PTSD prevalence rate of 23 percent among Iraq and Afghanistan Veterans. (Photo by Staff Sgt. Jason T. Bailey/USAF)

A meta-analysis on the prevalence of posttraumatic stress disorder among Veterans of Iraq and Afghanistan reveals that, on average, 23 percent of these Veterans have been diagnosed with the condition.

The figure is based on combined data from 33 past studies. The authors say the new results should be interpreted with caution, given the methodological differences among the existing studies, and certain other limitations—for example, most of the studies included only those Veterans enrolled in VA health care, which may skew the PTSD estimate upward.

The study appears in the April 2015 issue of the Journal of Anxiety Disorders.

According to lead author Dr. Jessica Fulton, a clinical psychologist at the Durham VA Medical Center and a clinical associate at Duke University Medicine Center, the main goal of the new study was to get a better idea of what the average rate of PTSD is for OEF and OIF Veterans.

To that end, her team conducted a meta-analysis by identifying 33 studies published between 2007 and 2013. Most of the studies they included had used national databases—from VA, in most case. Many of the individual studies included hundreds of thousands of unique Veterans, while others were conducted on a smaller scale. One challenge was that they often used different methods and criteria, which accounted for wide variations.

"Substantial research has examined PTSD prevalence among OEF/OIF Veterans. PTSD estimates among this cohort range from as low as 1.4 percent to as high as 60 percent," says Fulton. "Those are widely discrepant estimates."

She says previous studies tended to include participants who had not yet separated from service, along with Veterans. "Rates of PTSD may vary between the two groups for many reasons," she notes. For instance, military service members could potentially have motives for not reporting PTSD symptoms.

In addition to estimating the average rate of PTSD among the OEF/OIF Veteran cohort, Fulton and her colleagues also wanted to examine sources of variability in PTSD rates. In other words, why have studies shown so much variation? "We hoped to see how different factors, such as gender, race, military component, number of deployments, level of combat exposure, method of PTSD assessment, and region, influenced PTSD rates," says Fulton.

"While we identified some sources of variability between studies," says Fulton, "there is still a large amount of variability unaccounted for in the estimates across studies. The take-home message is that more work needs to be done. We need studies with population-based, representative samples that examine PTSD rates using gold-standard diagnostic interviews."

Knowing more precisely what percent of Veterans might have PTSD can help inform public policy. "The costs of both underestimating and overestimating PTSD are high," says Fulton. "PTSD is associated with increased rates of psychiatric and medical conditions, health care utilization, disability, substance abuse, and suicide. We also know that once PTSD symptoms manifest, they can become chronic and subsequently more difficult to treat. These findings suggest that, on average, almost a quarter of OEF/OIF Veterans have a diagnosis of PTSD. Therefore, financial and mental health care resources are needed to provide prompt and evidence-based intervention to promote recovery from PTSD."