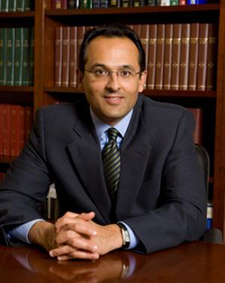 Dr. Sanjay Saint, with the VA Ann Arbor Healthcare System and the University of Michigan, is a leading national expert on health care-associated infections.

Dr. Sanjay Saint, with the VA Ann Arbor Healthcare System and the University of Michigan, is a leading national expert on health care-associated infections.

Simple changes to the way patients are selected for urinary catheters could lead to major improvements in hospital infection rates. What's more, those same changes, from limiting unnecessary catheters to improving how they are handled, could be adapted to address other health care-associated infections, a major source of illness globally.

That's the finding of a VA study on the "No Preventable Harms Campaign," the stated aim of which is to "create the safest health care system in the world."

Led by researchers at VA's Ann Arbor Healthcare System and the University of Michigan, the campaign started off by focusing specifically on catheter-associated urinary tract infections (CAUTIs). The results were published in the American Journal of Infection Control on March 1, 2015.

Hospital-acquired infections are common, costly, and dangerous, says Dr. Sanjay Saint, chief of medicine at VA Ann Arbor. They affect about 1 in 20 patients admitted to hospitals every year.

The infections increase a person's length of stay, overall health care costs and, ultimately, the risk of dying.

Among hospital-acquired infections, CAUTIs are one of the most common, based largely in the fact that urinary catheters are used in as many as 1 in 5 hospital patients.

According to Saint, who is also a professor of internal medicine at the University of Michigan, when people think of preventable harms in a hospital setting, they most often think of the kinds of major errors that spark global headlines: operating on the wrong patient, for example, or amputating the wrong limb. In reality, those kinds of errors are extremely rare. Rather, says Saint, infections are one of the key types of preventable harms, alongside blood clots in the extremities and medication-related errors.

And while these are challenges every hospital must deal with, VA's sheer size makes it a unique setting for such an effort. Serving almost 9 million Veterans each year in its 152 hospitals and more than 800 community-based outpatient clinics, VA is the largest integrated health care systems in the country and one of the largest in the world.

"VA has centralized data collection and there is a standardization of processes and purchasing," says Saint. "It can draw upon a wide range of expertise within each VA region. VA is able to pool its collective resources, financial as well as intellectual, and come up with an approach to tackle some of the more common preventable harms."

One such region, which includes 7 hospitals and 29 community-based outpatient clinics in central Illinois, Indiana, Michigan, and part of Ohio, developed the No Preventable Harms campaign. The campaign was the brainchild of a think tank, developed by regional VA leadership with the goal of keeping Veteran patients safe.

"There was a lot of excitement and enthusiasm about this," says Saint. "The people involved are people who believe in the mission of the VA, that every Veteran deserves superb care. The fact that leadership supported the effort made it...very rewarding."

The think tank identified common patient harms with obvious prevention strategies, such as hospital infection. Next, successful initiatives were reviewed to look at lessons learned from other hospitals' experiences. Finally, programs were developed to promote these patient-care initiatives throughout the entire region—one issue at a time.

Urinary catheters accounted for a third of all infections

What the researchers found was that although only 25 percent of hospital patients have a urinary catheter at a given time, patients with such catheters accounted for around one-third of all infections.

What's more, according to Saint, many of those catheters shouldn't be there. "Between a third and half of the days a patient has a catheter that's unnecessary," says Saint. "Previous studies have also shown that patients don't like having a catheter—it's painful and restricts their mobility. And finally, studies have shown about a third of physicians are unaware their patients even have a catheter."

In urinary catheterization, a hollow tube is inserted into a patient's bladder via the urethra. This allows urine to drain freely. Typically the procedure is temporary, lasting only a few days. The catheter is used to help patients who are unable to urinate due to issues ranging from urethral problems or prostrate surgery to dementia and spinal cord injuries.

Because nurses are the ones responsible for inserting, and ultimately removing, urinary catheters, the CAUTI program at Ann Arbor focused on coordinating with nursing staff. "There were many aspects to it," says Saint, "We developed a urinary management policy and announced that urinary tract infections were something we would focus on reducing. We used standardized catheter kits in order to prevent exposure to bacteria and we used an electronic template to manage which patients had catheters."

According to Saint, it was pretty easy to generate enthusiasm among the staff— they were generally on board from the get go. "This was something the staff understood. Most people realize that these are important issues."

Prior to the intervention, the VA hospital at Ann Arbor saw roughly 13.1 infections per 10,000 patient days. Three years later, that rate has decreased to 8 per 10,000, a 39-percent improvement.

After that success, the program was expanded throughout the region and produced similar results. The team has since coordinated with VA's National Center for Patient Safety, developed a poster for the World Health Organization on proper hygiene for catheter insertion, and begun to look at other preventable harms.

"The larger lesson is that VA can be a model for safe care," says Saint. "We want to create the safest health care system in the world, one region at a time, and VA is well-positioned to be a model for other centralized health systems in the world, whether you're talking about Japan or Italy or Great Britain. Their opportunities and challenges are similar to our opportunities and challenges.

"It's an example of VA leading the way, regionally, nationally, and internationally."

Using urinary catheters coated with a precious metal could save hundreds of millions of dollars in preventable infections, says a VA researcher and author of a new study on silver-impregnated catheters. The study, published in the American Journal of Infection Control on March 1, 2015, found that catheters coated in silver dramatically reduced bacterial counts in patients with urinary catheters. 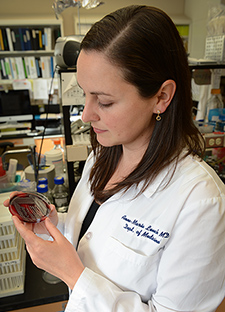 According to research by a team with VA and the University of Minnesota, including Dr. Anne-Marie Leuck, silver-coated urinary catheters can help to dramatically lower infection rates.

According to research by a team with VA and the University of Minnesota, including Dr. Anne-Marie Leuck, silver-coated urinary catheters can help to dramatically lower infection rates. (Photo by April Eiler)

Overall, indwelling urinary catheters are placed in between 16 and 25 percent of hospitalized patients. "If a patient is having trouble with urinary retention, meaning they're unable to pass urine on their own, or if we need to keep track of how much urine someone is producing, then the patient will receive a catheter," says Dr. Anne-Marie Leuck, a researcher affiliated with the Minneapolis VA Healthcare System.

For most, it's a temporary fix, lasting only a few days, but for those requiring a catheter for five days or longer, the risk of bacteria in the urine can be as high as 25 percent. What's more, for every additional day the catheter is in, that risk rises by another one to five percent.

"There are risks," says Leuck, who is also an assistant professor at the University of Minnesota. "There's a risk of trauma, which can cause bleeding and pain, but the best-known risk is that the catheter can serve as a conduit for bacteria to enter into the urine and that is, unfortunately, the first step in causing a urinary tract infection."

Catheters can act as 'two-way street'

In other words, these catheters can sometimes act as a two-way street. Urine goes out, bacteria come in, and at a staggering cost. Nationwide, the cost of catheter-related urinary tract infections is estimated at between $400 and $500 million annually. What's more, the infections are painful, can increase hospitalization time, and can even lead to sepsis and death.

There are a number of items on the market that aim to decrease infections in these catheters, among them, a silver-impregnated catheter with a specialized anti-reflux valve that is supposed to prevent bacteria from making their way into the bladder.

Silver, for the uninitiated, has uses beyond decoration and werewolf-shooting. The metal is a natural antibiotic and has been used in medical treatments since the time of Hippocrates. According to legend, the Phoenicians even used silver water vessels to store water during long voyages due to the metal's anti-microbial properties.

"Despite those properties, many of the studies looking at silver-impregnated catheters show inconsistent results," says Leuck, who suspected the inconsistencies were due to the catheter designs themselves, rather than from the presence of silver.

In order to find out, Leuck and colleagues, including Drs. James R. Johnson and Susan Kline, conducted a randomized pilot study of patients receiving indwelling catheters at the University of Minnesota Medical Center. In all, data were collected from 61 patients, 30 of whom received a newly-designed silver-impregnated catheter that incorporates the silver in a different way. The rest received standard silver-impregnated Foley catheters.

According to Leuck, the actual time the catheters were in place varied, but all were removed by the end of the 30-day follow-up period. Throughout the study, researchers checked for bacteria in the participants' urine. Bacteria in the urine were detected in 26 percent of the patients using a traditional Foley catheter, compared with only 7 percent of those using the new silver-impregnated catheter.

What's more important, says Leuck, is that the "time to bacterial presence" was significantly greater in the silver catheter. Remember that as catheter duration goes up, so does the risk of infection. For the silver-impregnated catheter, that risk was much lower.

"After three days you start to see a spike in the number of patients with bacteria in their urine in the control group," says Leuck. "By the time the catheters were in for five days, the difference is significant."

Independent of Leuck's study, VA has initiated a "No Preventable Harm" campaign (see main story) that aims to eliminate preventable harms in its patients. The first area of focus: infections caused by urinary catheters. Among the most important aspects of the initiative was a successful effort to decrease the time patients had a urinary catheter. If, as Leuck suggests, the silver-impregnated catheter resisted infection better than traditional catheters, particularly in the short term, pairing it with overall shorter durations could greatly impact infection rates.

"This was an initial study and we need to do more testing, but the results are exciting," says Leuck. "Not only were the catheters tolerated well by patients, but when you talk about 'No Preventable Harm' in VA hospitals and the goal to remove catheters as early as possible, you start to see what a difference these catheters might make."