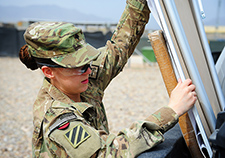 A female soldier loads a marker board into a vehicle during an inventory at a U.S. base in Afghanistan in 2013. A new study found that only a third of women who experienced a sexual assault while in the military sought post-assault health care. (Photo by Sgt. Jessi Ann McCormick/USA)

A female soldier loads a marker board into a vehicle during an inventory at a U.S. base in Afghanistan in 2013. A new study found that only a third of women who experienced a sexual assault while in the military sought post-assault health care. (Photo by Sgt. Jessi Ann McCormick/USA)

Despite growing public awareness of sexual assault of women during their military service and increased efforts by the Department of Defense to deter sexual crimes and encourage reporting and help-seeking, a VA study suggests most female service members who experience sexual assault are still unlikely to seek post-assault health care, at least in the short term. The study, published in Medical Care in April 2015, found that fewer than a third of sexually assaulted servicewomen sought such care.

The low numbers are notable, say researchers, because women who experience sexual assault tend to become heavy users of health care resources in the years following their assault.

While many studies have demonstrated the relationship between trauma, such as sexual assault, and chronic health problems, says Mengeling, this research looked specifically at the factors associated with post-assault care utilization and the reasons servicewomen did not seek care. The goal was to identify the factors that prevent servicewomen from seeking post-assault care.

Research has shown that women in the military experience higher rates of sexual assault than their peers in the general population, with estimates of 30-45 percent of servicewomen experiencing military sexual trauma.

For the study, researchers interviewed 1,339 women who were either Veterans or were still serving in the military about their experiences with attempted and completed sexual assault. Of the whole group, 207 of the women reported being sexually assaulted during military service.

"Few women got care and few women reported [the assault]," says Mengeling, also an associate research scientist at the University of Iowa. "Sexual assault is widely considered the most serious and traumatic crime possible, short of homicide. One of the first steps in potentially mitigating some of the negative health effects of sexual assault is seeking immediate post-assault medical and mental health care."

Mengeling adds, "Most of the servicewomen said they did not immediately seek care because they were embarrassed, or did not think they needed medical attention." Many also voiced concerns about confidentiality and how seeking care might adversely affect their military careers. However, few said that leadership discouraged seeking medical care or mental health services.

Those who reported the sexual assault were far more likely to receive care. Mengeling says, "This finding was consistent with our prior work showing that few servicewomen made an official report to Department of Defense officials about their sexual assault, and that concerns about confidentiality, being embarrassed, and adverse career impacts were associated with servicewomen's decisions about both seeking post-assault health care and reporting."

VA has been conducting universal military sexual trauma screening for both male and female Veterans since 2002.