Study finds no health drawbacks to Veterans' dual use of VA, Medicare Advantage 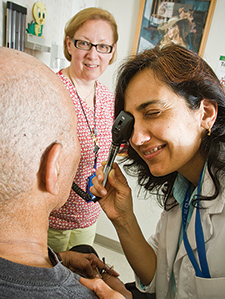 In a study that looked at a handful of quality measures for chronic disease care, Veterans who used both Veterans Health Administration care and a Medicare Advantage plan during 2008 or 2009 did no better or worse than those who used only VA care.

That's the gist of research on more than 6,600 older, chronically ill Veterans who were enrolled in both federal health systems. The study appeared online April 6, 2015, in the journal Health Services Research.

The researchers studied the issue because of concerns that dual enrollment may lead to poorly coordinated medical care, as well as duplicate taxpayer spending.

"Although dual use does not appear to have any negative impact on quality of care, we found no evidence that it improves the quality of care Veterans are getting. That point needs to be considered in light of the duplicate federal spending that comes along with dual enrollment," says Dr. Amal Trivedi, senior author on the study.

Trivedi is a physician and health services researcher at the Providence VA Medical Center and Brown University. He and lead author Dr. Alicia Cooper, who is with the state of Vermont, collaborated with researchers from two other VA sites and three universities.

All the 6,643 Veterans in the study were enrolled during 2008 or 2009 in both VA and a Medicare Advantage plan. Despite the dual enrollment, about a quarter of them actually used only VA for their outpatient care. Veterans in the VA-only group were more likely to be black, younger (within the 65-plus age bracket), and lower-income. They were also in poorer health overall.

The Medicare Advantage network involves private managed health plans that contract with the federal government. They receive a fixed dollar amount each year for every enrollee, regardless of how much medical care the patient actually consumes. If the patient gets all or most of his medical care through VA, the Medical Advantage plan is able to pocket the money from Uncle Sam without having to spend it.

In the study, in addition to the 25 percent of Veterans who relied strictly on VA care, despite their dual enrollment, another 20 percent used almost all VA care, and no Medicare Advantage care. Concerning these patients, the study authors wrote:

"The MA plans in which these individuals are enrolled stand to profit greatly under the circumstances, providing few or no services despite having been prospectively paid for the beneficiaries' annual care."

In a 2012 study published in the Journal of the American Medical Association, Trivedi's group estimated that in the five-year period from 2004 to 2009, VA spent $13 billion to provide Medicare-covered services to Veterans who in theory could have received those same services through their Medicare Advantage plans.

Trivedi says the trend toward dual enrollment has been growing. "The use of Medicare Advantage plans has grown sharply in the last few years," he says. "We've found that about 10 percent of the enrolled VA population is now also in one of these plans."

The good news from the current study is that there doesn't appear to be a significant drawback, medically speaking, to Veterans' receiving care through both systems, at least in terms of intermediate outcomes relating to blood pressure, blood sugar, or cholesterol control. The study didn't look at outcomes such as hospitalization or death.

The issue has not been well-studied, but some experts believe patients could be at greater risk when providers across the two systems don't communicate with each other about diagnoses and care plans, and pharmacies don't coordinate on medications.

Trivedi: "In VA, we like to deliver comprehensive care to Veterans, but we recognize that Veterans have choices for care outside of VA. That can potentially be a benefit if there are some complementary services and if both systems interact well and share information. But there can also be some potential quality challenges, particularly if information is not well-shared, or if there is fragmentation in care."

The new study allays some of that concern, at least with respect to outpatient care for everyday chronic diseases. On the other hand, the authors note that even among the 5,000 or so Veterans in the study who used both systems to some extent, most relied more heavily on VA, with relatively few Medicare Advantage visits. This might have blunted any differences in outcomes between the VA-only and dual-use groups.

Still, the authors say the lack of any clear clinical advantage from dual use only sharpens worries over duplicate spending.

In their 2012 paper, Trivedi's group proposed two possible remedies. One would be to monitor Medicare Advantage plans for VA enrollees, and adjust the plans' payments downward according to some formula. The other would be to allow VA to seek reimbursement from the Medicare system for services it provides to Veterans who are enrolled in Medicare Advantage plans. Current law prohibits VA from doing so.

To watch a video of Dr. Trivedi discussing his VA-funded research on dual VA-Medicare enrollees, visit www.hsrd.research.va.gov/news/video and look under the category "Healthcare Equity."