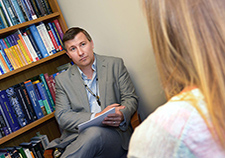 Non-suicidal self-injury—that is, purposefully hurting oneself without conscious suicidal intent—is relatively common among Iraq and Afghanistan Veterans, according to a study published online April 1, 2015, in Psychiatry Research. The research, conducted by Dr. Nathan Kimbrel, a research psychologist at the Durham VA Medical Center, included 151 Iraq and Afghanistan Veterans. Of those, 14 percent reported a history of non-suicidal self-injury, or NSSI.

Moreover, the study found that those who deliberately hurt themselves were more likely to engage in suicidal behavior. The researchers hope that NSSI could serve as a marker for identifying which Veterans are most likely to attempt suicide.

For the study, Kimbrel and his colleagues recruited Iraq and Afghanistan Veterans at the Central Texas VA Health Care System. The researchers excluded Veterans with schizophrenia or bipolar disorder, but they included a higher-than-average proportion of Veterans with PTSD. In the final study group, 35 percent had PTSD, 21 percent had depression, and 8 percent had alcohol use disorder. More than 90 percent of group was male and 67 percent were white.

"These are people who are purposefully engaging in bodily harm, but the intent is not to commit suicide," says Kimbrel. "There are many reasons why they do this, but this behavior is associated with increased odds of eventually attempting suicide."

Kimbrel points to cutting oneself as the most commonly thought of form of NSSI. "But there are a wide range of non-suicidal self-injurious behaviors that Veterans might be engaging in that clinicians should be aware of, such as burning or hitting oneself," notes Kimbrel.

Another recent study by Kimbrel's team that was published in the Journal of Traumatic Stress in 2014 found that more than half of 214 male Iraq and Afghanistan Veterans seeking treatment for PTSD reported engaging in NSSI during their lifetime. Forty-five percent reported NSSI during the previous two weeks.

Those same Veterans were nearly four times more likely to engage in suicidal ideation, compared with Veterans seeking treatment for PTSD but without a history of NSSI.

"Obviously, the rates of suicidal ideation that we identified among Veterans engaging in these forms of NSSI were much higher than what we typically see among patients seeking treatment for PTSD," says Kimbrel.

According to Kimbrel, NSSI may increase a person's capacity to commit suicide. This ties in with a theory originally described by Florida State University's Dr. Thomas Joiner in his 2005 book Why People Die By Suicide. The theory is that suicide essentially requires two components to align, a desire and a capacity.

According to Kimbrel, NSSI, along with the kind of violence often encountered in combat, can increase people's capability for suicide by mitigating some of their natural, innate responses to injury.

Kimbrel's hope is that by expanding suicidal assessments of Veterans to include NSSI information, providers can better identify those at high risk for suicide long before they ever make an attempt.

"If we can identify Veterans engaging in NSSI early on, then hopefully we can begin to change their trajectory and put them onto a more positive course," says Kimbrel. "There are treatments that can help. The most important thing is to get Veterans at increased risk for suicide into treatment as soon as possible."