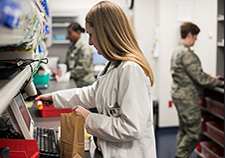 A pharmacist scans a prescription at the Joint Base McGuire-Dix-Lakehurst pharmacy, serving Tricare customers. New VA research based on the records of nearly 26,000 Tricare patients shows a link between statin drugs and increased diabetes risk. (Photo by Airman 1st Class Lauren Pitts)

A pharmacist scans a prescription at the Joint Base McGuire-Dix-Lakehurst pharmacy, serving Tricare customers. New VA research based on the records of nearly 26,000 Tricare patients shows a link between statin drugs and increased diabetes risk. (Photo by Airman 1st Class Lauren Pitts)

In a database study of nearly 26,000 beneficiaries of Tricare, the military health system, those taking statin drugs to control their cholesterol were 87 percent more likely to develop diabetes.

The study, reported online April 28, 2015, in the Journal of General Internal Medicine, confirms past findings on the link between the widely prescribed drugs and diabetes risk. But it is among the first to show the connection in a relatively healthy group of people. The study included only people who at baseline were free of heart disease, diabetes, and other severe chronic disease.

"In our study, statin use was associated with a significantly higher risk of new-onset diabetes, even in a very healthy population," says lead author Dr. Ishak Mansi. "The risk of diabetes with statins has been known, but up until now it was thought that this might be due to the fact that people who were prescribed statins had greater medical risks to begin with."

Mansi is a physician-researcher with the VA North Texas Health System and the University of Texas Southwestern in Dallas.

The higher the dose, the greater the risk

In the study, statin use was also associated with a "very high risk of diabetes complications," says Mansi. "This was never shown before."Among 3,351 pairs of similar patients—part of the overall study group--those patients on statins were 250 percent more likely than their non-statin-using counterparts to develop diabetes with complications.

Statin users were also 14 percent more likely to become overweight or obese after being on the drugs. Mansi points out that other studies have arrived at a similar finding through different research methods.

The study also found that the higher the dose of any of the statins, the greater the risk of diabetes, diabetes complications, and obesity.

A key strength of Mansi's study was the use of a research method known as propensity score matching. Out of the total study population, the researchers chose 3,351 statin users and paired them with non-users who were very similar, at baseline, based on array of 42 health and demographic factors. The only substantial difference, from a research standpoint, was the use of statins. This helped the researchers isolate the effects of the drugs.

"This approach helps us to make comparisons that are fair and balanced," says Mansi.

On a wider scale, looking at the overall comparison between the study's roughly 22,000 nonusers and 4,000 users, and statistically adjusting for certain factors, the researchers found a similar outcome: Users of statins were more than twice as likely to develop diabetes.

The researchers examined patient records for the period between October 2003 and March 2012.

About three-quarters of the statin prescriptions in Mansi's data were for simvastatin, sold as Zocor.

Mansi stresses that the study doesn't definitively show that statins cause diabetes, nor does it mean people should stop using the drugs, which are widely prescribed to help people lower their cardiac risk factors.

"No patient should stop taking their statins based on our study, since statin therapy is a cornerstone in treatment of cardiovascular diseases and has been clearly shown to lower mortality and disease progression,"he says. "Rather, this study should alert researchers, [clinical] guideline writers, and policymakers that short-term clinical trials might not fully describe the risks and benefits of long-term statin use for primary prevention."

Primary prevention refers to warding off disease in the first place.

Mansi urges further trials, similar to his group's, to better understand the long-term effects of statin use.

Overall, besides driving further research, Mansi says he hopes the results will help inform conversations between patients and providers about the risks and benefits of statins.

"I myself am a firm believer that these medications are very valuable for patients when there are clear and strict indications for them," he says. "But knowing the risks may motivate a patient to quit smoking, rather than swallow a tablet, or to lose weight and exercise. Ideally, it is better to make those lifestyle changes and avoid taking statins if possible."