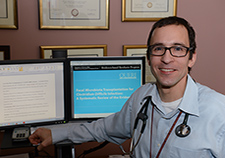 As strange a procedure as it sounds, fecal transplantation can be an effective method for battling stubborn intestinal infections, according to a review study published by Veterans Affairs investigators in the Annals of Internal Medicine on May 5, 2015.

Fecal transplantation, or fecal microbiota transplant, involves removing stool, which contains healthy bacteria, from a donor and inserting it into a sick patient. The procedure, which actually dates back thousands of years, is hardly new, but an increase in hard-to-beat intestinal bacterial infections has prompted VA researchers to revisit the effectiveness of FMT.

Clostridium difficile, or C. difficile, was responsible for 500,000 infections and some 29,000 deaths in 2011 alone, according to the U.S. Centers for Disease Control and Prevention.

The review looked at the results of two randomized control trials and an additional 33 uncontrolled case series studies or case reports. Overall, the studies involved data from more than 500 patients with C. difficile. FMT proved successful in treating 85 percent of patients with recurring C. difficile infections. What's more, the transplants helped 55 percent of patients who weren't responding to standard drug treatments. The bottom line, according to the researchers, is that FMT is a safe and effective way to treat recurring C. difficile infections. For initial infections, or those cases deemed "refractory" (non-responsive to treatment), success rates were more variable.

The review was conducted by investigators with VA's Evidence-based Synthesis Program, in part to help VA determine if the treatment is effective enough to be offered at VA facilities.

The treatment revolves around intestinal flora. In a healthy person, the bowels are chock-full of healthy bacteria. When a person is on antibiotics, the balance can be upset; after all, antibiotics kill bacteria indiscriminately, whether harmful or not. The result, all too often, is the development of gastrointestinal disease, specifically, C. difficile-related diarrhea and colitis.

"Historically C. difficile was seen mostly in those with health care exposure, almost exclusively those who have received antibiotics," says Dr. Dimitri Drekonja, lead author on the review and a staff physician in the infectious disease section at the Minneapolis VA Health Care System. "Lately, though, there have been increasing reports of people getting it who don't have any of that exposure. We're very good at spreading germs around. MRSA used to be a bacterium that was only hospital-acquired, and it seems that C. difficile is doing the same thing, emerging from the hospital setting and moving out into the community. It is, right now, the most common cause of infectious diarrhea."

A new weapon against an urgent threat

The issue is so pressing, in fact, that in 2013, the Centers for Disease Control and Prevention placed C. difficile into its top threat category: urgent. Infection can result in repeated hospitalizations, malnourishment, and dehydration, and it can occasionally prove fatal. According to Drekonja, who is also an assistant professor of medicine at the University of Minnesota, it's not that C. difficile is hard to treat, but rather that it has a distressingly high recurrence rate. Put simply, it is one stubborn bug. Between 15 and 30 percent of patients experience recurrent episodes of the illness. It is quickly replacing MRSA as the most common bacterial infection found in hospital settings.

"The single biggest trigger is receipt of further antibiotics," says Drekonja. "But sometimes that's not modifiable. If you need antibiotics for something very serious like a severe necrotizing skin condition or a bad cellulitis, then nothing else will work. That puts you in an uncomfortable position of knowing you need treatment, but you're definitely increasing your risk of a C. difficile recurrence."

Mainstream medical treatment involves a break from antibiotics whenever possible. Physicians may also prescribe vancomycin or other antibiotics that are more effective against C. difficile. These treatments, however, tend to produce sustained success only 30 to 80 percent of the time. The variation, says Drekonja, depends on the number of recurrences, duration of treatment, and other variables.

Procedure in use in VA on case-by-case basis

Currently FMT is used only on a case-by-case basis in VA, mostly through coordination with non-VA providers. "It's in an uncertain regulatory environment," says Drekonja. "Is this a drug? If so, it's not FDA-approved. Different facilities are approaching it differently."

"The treatment isn't usually given to acutely ill patients," says Drekonja. "The bulk of the patients [in the studies we reviewed] had an episode or multiple episodes and were treated through conventional means. Then once they were largely asymptomatic but at risk of a recurrence, they were given the FMT."

The transplants were delivered in different ways in the studies that Drekonja's team reviewed: Some were given through the upper gastrointestinal tract, through the use of either a nasogastric or nasojejunal tube, more colloquially known as a feeding tube, or, in one study, by ingestion of capsules of frozen stool. Others were delivered via enema, rectal tube, or colonoscopy.

Results overall were positive. In the frozen-capsule study, for example, 20 patients took 15 capsules per day over two days and had a 70 percent success rate. In a study using nasogastric tubes, 81 percent of patients achieved resolution within the first three months, compared with 31 percent and 23 percent in the two control groups receiving vancomycin.

Across the board, in fact, FMT proved highly effective, with no delivery method being clearly superior to the others. Nevertheless, without confirmation from a controlled trial, Drekonja doesn't believe the procedure is ready for widespread VA use. "At this point, the evidence is largely through case series," he says.

More research is needed, he says, and perhaps a little socialization. After all, the concept itself can be a bit distressing. Drekonja says convincing patients of the need for FMT can sometimes be a challenge.

"Those that go through it are quite satisfied. But when we have approached patients about this, a few didn't even want to finish the conversation, let alone do it. There is a certain yuck factor that will always turn off a segment of the population. Now, if they have five recurrent episodes of C. difficile, will that yuck factor all of a sudden drop out?"

Editor's note: This story is an updated version of an article that was originally posted on this site Jan. 28, 2015.