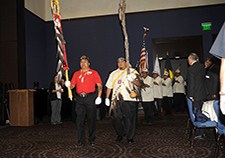 When it comes to serving in the military, American Indians are one of the best-represented groups. They've fought in every major conflict in U.S. history.

But when the fight is over, these Veterans often return home to extremely rural areas, making it difficult for them to receive the kind of care they've earned. The end result: American Indian Veterans are in poorer physical health than any other ethnic group of Veterans in the U.S.

"It's the history of our nation," says Dr. Josea Kramer, associate director for education and evaluation at the Geriatric Research, Education and Clinical Center at the VA Greater Los Angeles Healthcare System. "Indian reservations were established in isolated frontier areas. Even today there is limited access to health care for many of these Veterans."

Kramer, also a professor at the David Geffen School of Medicine at UCLA, recently studied how VA's expansion of home-based primary care has improved access for American Indian Veterans living on rural reservations. The results were published in the Journal of the American Geriatrics Society in April 2015.

"Many of these warriors receive care from the Indian Health Service as well but may not have access to all the care VA is able to provide," says Kramer.

American Indian Veterans have higher rates of alcohol and substance abuse and also tend to suffer from more comorbidities, compared with other Veteran populations.

And, while many American Indian Veterans travel to VA facilities for care, those who are homebound and on reservations have fewer options.

"While the Indian Health Service does offer services, they don't offer standard benefits for long-term care," says Kramer. As a result, homebound Veterans on reservations are often unable to receive the kinds of non-institutional long-term care VA normally provides to older Veterans.

VA and the Indian Health Service signed a memorandum of understanding in 2005 and again in 2010 to improve access and health outcomes, as well as to promote sharing of resources. That agreement includes access to VA's home-based primary care program.

For rural American Indian Veterans, home-based primary care is a way to receive long-term care once clinic-based care is no longer realistic. Home-based care teams are supervised by a physician and involve routine care visits by a physician or nurse practitioner and, as needed, from other members of the interdisciplinary team, such as dieticians or mental health professionals.

"It's an awesome and unique VA benefit," says Kramer. "There's nothing like it on reservations, as far as I know."

Originally designed for use in urban populations, VA's home-based primary care program allows individual VA medical centers to tailor their model to fit the population and region. That flexibility gives VA a unique capacity to serve American Indian Veterans, says Kramer, whose study involved interviews with facility and regional VA leaders, as well as clinical and non-clinical staff from 14 VA medical centers. All the participants were volunteers, and their input remained anonymous.

Learning to work with tribal governments

Twelve of the VAMCs established home-based care programs specifically aimed at American Indian populations in reservation communities. As such, they worked closely with tribal leaders and tribe-operated facilities.

All in all, six different models of home-based care were observed in the study. Two involved a joint privileging partnership or financial agreement between VA and tribal health programs to reimburse the tribes for medical care provided to enrolled Veterans.

All six models were driven by patient-centered care that allowed Veterans to determine their provider of choice based on convenience, cost, and availability of service.

Kramer notes: "There was a real learning curve for facilities to learn to work with tribal governments. VA often reaches out to individual Veterans, but these are sovereign independent nations and so even permission to go onto the reservation is dependent on approval by the tribal government. VA leadership had to change the way they were looking at the patient population."

Trust was key, says Kramer. "There are a lot of programs that come and go in these communities, and trust can be an issue. VA had to convince tribal leaders and community members that it was there to stay."

She says demonstrations of goodwill and caring went a long way in building a foundation of trust. One interviewee had this to say:

"It really helps the relationship between the Native Americans and not only the VA but the American government. It's just been tremendous to see that relationship develop. You know, some of these folks we met said they'd never, ever put foot in a VA , and now a lot of them come in here for specialty care. So I think getting rid of that stigma for these folks of the VA, or even the government, is just something you can't put a price on â€¦ because now their kids, you know, and their grandkids will see and hopefully have a different opinion of the VA and the [U.S.] government."

What's more, according to Kramer, VA providers often benefited in ways they hadn't anticipated. "They became engaged in the community and were embraced. Over and over the VA employees we interviewed talked about how it was a two-way street."

In nearly half the interviews, in fact, respondents said the foundation for success was building long-term and trusting relationships between VA and tribal government and community organizations, along with the Veterans themselves.

"The fact that we were able to draw these federal agencies closer together and work to deliver care in these extremely rural areas is really a model of how to co-manage care effectively across patients and geography," says Kramer. "This is something that can have a broader application for the 36 percent of Veterans who live in rural areas."