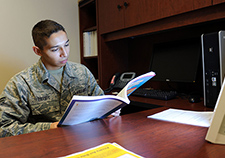 An airman uses a "happy light" at Ellsworth Air Force Base in 2014. A clinical trial by VA researchers and colleagues has found that light therapy and cognitive behavioral therapy are equally effective for seasonal affective disorder. (Photo by Senior Airman Hailey R. Staker/USAF)

An airman uses a "happy light" at Ellsworth Air Force Base in 2014. A clinical trial by VA researchers and colleagues has found that light therapy and cognitive behavioral therapy are equally effective for seasonal affective disorder. (Photo by Senior Airman Hailey R. Staker/USAF)

People with winter seasonal affective disorder, or SAD, could benefit as much from cognitive behavioral therapy as they do from light therapy, the current gold-standard for treatment, according to new research. The findings could offer patients additional treatment options, and perhaps a better long-term solution, says Dr. Kelly Rohan, a professor of psychological science at the University of Vermont.

In a new study, published online in the American Journal of Psychiatry on April 10, 2015, Rohan found cognitive behavioral therapy, or CBT, was every bit as effective as the current gold-standard for treatment, light therapy.

"People would like for us to split these treatments out and say one is more effective than the other or that one works better for certain patients, but in terms of the data it is neck and neck. The treatments were not distinguishable in terms of their performance," says Rohan, who completed her residency and post-doctoral fellowship at the G.V. Montgomery VA Medical Center in Jackson, Miss.

For the study Rohan, along with researchers from the University of Maryland and VA, randomized 177 adults who were experiencing a current bout of SAD. Eighty-eight were given light therapy. The rest underwent cognitive behavioral therapy.

In the end, both groups experienced remission rates of 47 percent.

"It is important to understand that seasonal affective disorder is clinical depression. It occurs in fall and winter and increases by latitude. The farther north you get, the higher the prevalence," says Rohan. "There is a misconception that SAD is just the winter blues. This is seasonally recurrent clinical depression. It is a serious mental health problem that can negatively impact quality of life and health."

Previous studies support the effectiveness of light therapy in treating seasonal affective disorder, although the reasons are not entirely clear. Many researchers suspect the light may replace lost sun exposure due to shorter days and reset the body's internal clock, or circadian rhythms. For this reason, most clinicians who use light therapy advocate morning treatment.

The light therapy used in Rohan's study involved exposure to a 10,000-lux cool-white florescent light for 30 minutes every morning upon waking initially. The duration was then individually adjusted each week, up to two hours maximum, and monitored, for six weeks. The participants were then encouraged to continue daily light therapy until the spring, when SAD typically goes into remission.

'CBT boot camp' for half the participants

The CBT used with the other 89 participants was an adaptation of traditional cognitive therapy. "We had to condense the treatment into a shorter time frame in order to fit the winter season," says Rohan. "It's kind of a CBT boot camp." The participants underwent twelve 1.5-hour sessions, delivered twice per week over six weeks, in groups with a community therapist. Participants focused on behaviors that would help them cope with winter, such as changing negative thoughts related to the weather or season, and were encouraged to engage in pleasurable activities during the winter to counteract avoidance.

Though the remission rates were nearly identical between the two study arms, Rohan feels for many patients, CBT may be a better long-term option.

Light therapy is effective, says Rohan, but it requires a person to commit to daily therapy every winter. Not all patients may be willing or able to adhere. CBT, on the other hand, is based on the assumption that people learn skills in treatment to fortify themselves against recurrence after treatment ends.

"In CBT, we try to get people to approach rather than avoid winter, and to take control of their moods rather than letting the environment dictate how to feel. I'm not pushing people to be outside if they're averse to the cold," says Rohan. "These are people who need to identify pleasurable activities that can be added to their winter routine. People with SAD often gravitate toward things that aren't possible in the winter, like gardening or going to the beach. If so, these can be substituted with fun winter activities, including indoor activities. Join a gym. Join a club. Stay socially connected. See movies. Take advantage of free activities in your community. The premise here is that rather than continuing to treat a patient every winter, wouldn't it be nice if we could teach people skills so they could proactively cope with winter on their own?"