Coronary heart disease among Veterans: How do men and women differ? 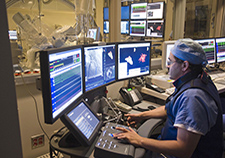 A new VA study has homed in on the clinical differences between men and women Veterans who undergo procedures in cardiac cath labs like this one at the Pittsburgh VA. (Photo by Glenn Hangard)

A new VA study has homed in on the clinical differences between men and women Veterans who undergo procedures in cardiac cath labs like this one at the Pittsburgh VA. (Photo by Glenn Hangard)

In a recent study, women Veterans who underwent cardiac catheterization in VA tended to be younger and more obese, and were more likely to have posttraumatic stress disorder or depression, than their male counterparts. Notwithstanding the differences, their long-term outcomes were about the same as those of their male counterparts.

The study appears in the March 2015 issue of Circulation. Cardiovascular Quality and Outcomes.

Over the past decade, the numbers of women Veterans seeking VA care have doubled, and they are the fastest-growing group within VA. These women bring with them a sizeable burden of heart disease. Studies of non-Veteran women have shown that women have more risk factors, receive less aggressive treatment, and have worse overall outcomes than men when it comes to coronary artery disease.

In this form of heart disease, the arteries supplying blood to the heart become narrowed or blocked. Generally, the term is used interchangeably with "coronary heart disease."

"More women than men die of coronary heart disease in the United States. It's a huge problem," says Dr. Claire Duvernoy, chief of cardiology at the VA Ann Arbor HealthCare System and a professor of medicine at the University of Michigan.

Interestingly, men actually have higher rates of coronary artery disease than women, but because women tend to live longer, they eventually catch up and die at higher rates from the disease, notes Duvernoy.

For the study, Duvernoy and other researchers looked at nearly 86,000 Veterans, nearly 3,200 of whom were women. All the Veterans underwent initial cardiac catheterization in VA between October 2007 and September 2012. The average age for women undergoing the catheterization was about 57, six years younger than their male counterparts.

Part of the reason, says Duvernoy, is the way coronary artery disease presents itself in women. While men tend to have higher rates of obstruction and more traditional heart risks, women often don't experience blockages to the same extent. "Women present with lower rates of obstruction," says Duvernoy. "For them, the disease tends to be less focal and perhaps more microvascular."

Because there is a lesser chance of finding a blockage, says Duvernoy, providers can sometimes misdiagnose the problem.

"Unfortunately, that has been a struggle. These women come in with chest pain but they don't have an obstruction. When that happens, there is a risk that the provider thinks their patient is just having non-cardiac chest pain or that they don't have 'real coronary disease.'" However, she says, "These patients still need aggressive medical therapy and lifestyle modifications."

Perhaps most surprising to Duvernoy was the role mental health, particularly depression and PTSD, played in the presentation of many of these patients.

"It's something that really deserves closer attention," she says. "It's complicated. Depression and PTSD can manifest in chest-pain syndrome that isn't related to obstructive coronary disease. But at the same time, they're both risk factors for later development of coronary artery disease. So it's something we need to address. Part of that is ensuring that cardiologists coordinate with mental health providers to make certain that we can provide optimal care for these patients."