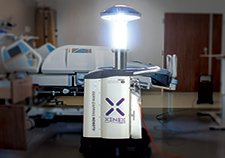 In just over 10 minutes, a pulsed xenon ultraviolet light system can disinfect a hospital room every bit as good as a human can, according to a VA study.

That's not to say that the light, which kills common and dangerous bacteria like Clostridium difficile, methicillin-resistant Staphylococcus aureus, and vancomycin-resistant enterococci, will replace manual disinfection. Rather, say researchers, the light can supplement more traditional methods.

"There are times when surfaces are not thoroughly disinfected due to human error or because the contamination is so significant," says Dr. Chetan Jinadatha, chief of infectious diseases at the Central Texas Veterans Health Care System in Temple, Texas.

His team's study appeared in the American Journal of Infection Control on Feb. 10, 2015.

Researchers assess aerobic bacterial colony counts by taking samples from high-touch surfaces in hospital rooms: call buttons, railings, or TV remote controls, for example. The samples are then incubated for 48 hours, during which time bacteria present in the sample are allowed to develop into colonies. After 48 hours, the colonies are counted and categorized.

"The more colonies we find on a contaminated surface, the greater the chances that a potentially pathogenic bug like MRSA is present," says Jinadatha, who is also an assistant professor at Texas A&M Health Science Center College of Medicine. The presence of bacteria in hospital rooms isn't unique to VA, of course. Studies have shown that just entering a recently occupied hospital room in the U.S., even after it has been disinfected, increases one's chances of contracting MRSA by as much as 40 percent.

"There have been studies on how pulsed UV works alongside manual cleaning," says Jinadatha. "We wanted to see how it performed by itself."

For the study, the researchers selected 38 recently vacated rooms at the VA facility in Temple. Five high-touch surfaces within each room were sampled both before and after the UV disinfection. The surfaces tested included the patient call button, bedrail, and tray table, as well as the handrail and toilet in the restroom. In all, 190 aerobic bacteria samples were collected.

After the samples were incubated, Jinadatha counted roughly 74 colonies, on average, from each room, with the call button and bedrail having the highest counts.

The pulsed UV light system was then wheeled into the room. Built like an unwieldy shop vacuum, the device has a large saucer-like reflector on top of a column that houses the bulb, filled with xenon gas.

When the system is switched on, high-voltage electricity passes through the bulb and releases a germicidal spectrum of ultraviolet light that kills bacteria.

"The device pulses for about five minutes and [the procedure] is always performed behind closed doors," says Jinadatha. "There are no staff or patients present when it is on." The device also has safety features that prevent it from turning on when it detects any motion.

The results showed that the UV method cut the number of colonies per room by about 70 percent, roughly the same level of effectiveness as manual disinfection. "The pulsed UV was just as effective as manual cleaning. Levels of bacterial colonies were reduced to no more than 20 or so colonies per room," says Jinadatha. "Of course we're not advocating that anyone just use pulsed UV. It should be seen as something that can complement manual cleaning."

The device isn't perfect. Partly because light doesn't bend, items have to be manipulated between sessions and the machine must be repositioned a few times in order for the light to reach areas that were previously shaded. For example, "between sessions a technician would need to come in and flip over the remote control or the telephone handset in order to reach the bottom," says Jinadatha.

"It takes approximately 12 additional minutes per room including set up time," says Jinadatha. "You would do the bathroom first, with the door shut, and while it's working there you can prepare the living room."

Twelve minutes per hospital room might seem like an excessive amount of time for extra cleaning, particularly when accounting for larger hospitals, but, according to Jinadatha, the study results suggest it is worth it. "You cannot put a value when potentially saving a Veteran's life," he says.

Jinadatha previously authored a study showing that together the two methods—manual disinfection and UV light—could effectively kill between 90 and 99 percent of all aerobic bacteria in an average hospital room.