Can light therapy help the brain? 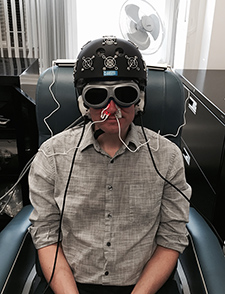 A staffer in Dr. Margaret Naeser's lab demonstrates the equipment built especially for the research: an LED helmet (Photomedex), intranasal diodes (Vielight), and LED cluster heads placed on the ears (MedX Health). The real and sham devices look identical. Goggles are worn to block out the red light. The near-infrared light is beyond the visible spectrum and cannot be seen. (Photo courtesy of Naeser lab)

A staffer in Dr. Margaret Naeser's lab demonstrates the equipment built especially for the research: an LED helmet (Photomedex), intranasal diodes (Vielight), and LED cluster heads placed on the ears (MedX Health). The real and sham devices look identical. Goggles are worn to block out the red light. The near-infrared light is beyond the visible spectrum and cannot be seen. (Photo courtesy of Naeser lab)

Following up on promising results from pilot work, researchers at the VA Boston Healthcare System are testing the effects of light therapy on brain function in Veterans with Gulf War Illness.

Veterans in the study wear a helmet lined with light-emitting diodes that apply red and near-infrared light to the scalp. They also have diodes placed in their nostrils, to deliver photons to the deeper parts of the brain.

The light is painless and generates no heat. A treatment takes about 30 minutes.

The therapy, though still considered "investigational" and not covered by most health insurance plans, is already used by some alternative medicine practitioners to treat wounds and pain. The light from the diodes has been shown to boost the output of nitric oxide near where the LEDs are placed, which improves blood flow in that location.

"We are applying a technology that's been around for a while," says lead investigator Dr. Margaret Naeser, "but it's always been used on the body, for wound healing and to treat muscle aches and pains, and joint problems. We're starting to use it on the brain."

Naeser is a research linguist and speech pathologist for the Boston VA, and a research professor of neurology at Boston University School of Medicine (BUSM). She is also a licensed acupuncturist and has conducted past research on laser acupuncture to treat paralysis in stroke, and pain in carpal tunnel syndrome.

How do the diodes work?

The LED therapy increases blood flow in the brain, as shown on MRI scans. It also appears to have an effect on damaged brain cells, specifically on their mitochondria. These are bean-shaped subunits within the cell that put out energy in the form of a chemical known as ATP. The red and near-infrared light photons penetrate through the skull and into brain cells and spur the mitochondria to produce more ATP. That can mean clearer, sharper thinking, says Naeser.

Naeser says brain damage caused by explosions, or exposure to pesticides or other neurotoxins—such as in the Gulf War—could impair the mitochondria in cells. She believes light therapy can be a valuable adjunct to standard cognitive rehabilitation, which typically involves "exercising" the brain in various ways to take advantage of brain plasticity and forge new neural networks.

"The light-emitting diodes add something beyond what's currently available with cognitive rehabilitation therapy," says Naeser. "That's a very important therapy, but patients can go only so far with it. And in fact, most of the traumatic brain injury and PTSD cases that we've helped so far with LEDs on the head have been through cognitive rehabilitation therapy. These people still showed additional progress after the LED treatments. It's likely a combination of both methods would produce the best results."

The LED approach has its skeptics, but Naeser's group has already published some encouraging results in the peer-reviewed scientific literature.

Last June in the Journal of Neurotrauma, they reported the outcomes of LED therapy in 11 patients with chronic TBI, ranging in age from 26 to 62. Most of the injuries occurred in car accidents or on the athletic field. One was a battlefield injury, from an improvised explosive device (IED).

Neuropsychological testing before the therapy and at several points thereafter showed gains in areas such as executive function, verbal learning, and memory. The study volunteers also reported better sleep and fewer PTSD symptoms.

That's happening now, thanks to VA support. One trial, already underway, aims to enroll 160 Gulf War Veterans. Half the Veterans will get the real LED therapy for 15 sessions, while the others will get a mock version, using sham lights.

Then the groups will switch, so all the volunteers will end up getting the real therapy, although they won't know at which point they received it. After each Veteran's last real or sham treatment, he or she will undergo tests of brain function.

Naeser points out that "because this is a blinded, controlled study, neither the participant nor the assistant applying the LED helmet and the intranasal diodes is aware whether the LEDs are real or sham. So they both wear goggles that block out the red LED light." The near-infrared light is invisible to begin with.

Besides the Gulf War study, other trials of the LED therapy are getting underway:

Naeser hopes the work will validate LED therapy as a viable treatment for Veterans and others with brain difficulties. She foresees potential not only for war injuries but for conditions such as depression, stroke, dementia, and even autism.

"There are going to be many applications, I think. We're just in the beginning stages right now."