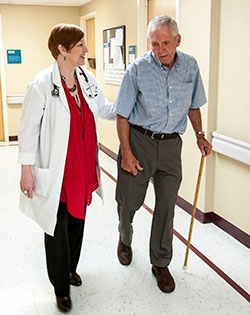 Veteran Kenneth Hanners of Decatur, Ala., is guided by Dr. Cynthia J. Brown as he participates in a fall-prevention clinic at the Birmingham VA Medical Center. (Photo by Joseph De Sciose)

Related article: Walking study shows 'it's feasible and safe to get patients out of bed'

A small but growing number of researchers are determined to improve hospital care—especially for the elderly—by encouraging patients to get up and move around more during their stays.

Cynthia J. Brown, MD, MSPH, is in the forefront. She was recognized earlier this year by the American Geriatrics Society for her work, receiving the group's Outstanding Scientific Achievement for Clinical Investigation Award.

Brown's research has shown that even a few days in the hospital can be a serious setback for older people. A study by her team at the Birmingham VA Medical Center showed that older people, on average, spend about 83 percent of their time in the hospital lying in bed. They spend only 43 minutes per day standing and walking around. Research outside VA has produced similar findings.

The short-term lack of movement takes its toll—and the losses are often permanent.

"There's a population of older people who basically lose their ability to take care of their activities of daily living—to dress and bathe themselves, for instance," says Brown. "They go home from the hospital less able and end up staying less able, even after they recover from whatever the acute illness was that put them in the hospital."

Researchers don't completely understand why only a few days spent sedentary in the hospital can have such marked effects on some older people. Brown now has a VA-funded study to look at the issue. "Why aren't people recovering—and is it a subgroup of older people that doesn't recover well?" Brown asks. "That'll help us know whom we really need to be targeting with mobility interventions in the hospital." The study will include 200 Veterans.

One theory is that some elders are in such a tenuous state to begin with that even a brief hospital stay can trigger irreversible decline.

"The thinking is that there are lots of older adults out in the community who are hanging on by their fingernails to their independence," says Brown. "Yes, they're able to do things, but it's a struggle. Then they come in to the hospital, and we stick them in bed for three to five days, and that just tips them over the edge. They're not able to recover from that â€˜insult' to their strength and ability."

Brown, a former physical therapist, points out that even younger people experience some declines from brief periods of low mobility—for example, when they are laid up with the flu for two or three days. "We know from NASA's work that there are changes that start happening in the human body within 24 hours of getting put in bed. People start losing muscle mass. There are changes in blood pressure, so you're more likely to experience a sudden drop in blood pressure when you stand up, which makes you dizzy."

In fact, people of all ages are at higher risk of falling when they return home after a few days in the hospital, notes Brown. Among seniors, the problem is more severe.

Can hospitals change their ways?

Part of the low-mobility syndrome, says Brown, lies in the physical layout of hospital rooms and units. "They're very much designed for the ease of the health care provider and not so much for the patient," says Brown. "I hope hospitals will look different in the future."

There are, however, some improvements that can be made now, Brown emphasizes. They have to do mainly with hospital routines.

"If we can at least get our processes of care to look different," she says, "that would do an enormous amount for older adults." As things stand now, "The whole environment has been created in such a way that no one wants to get up. There are disincentives to walk."

Among the simple remedies she proposes:

Brown also has little tolerance for the dreaded hospital gown—that invention of modern medicine that has facilitated hospital care but rendered many patients red-faced, wishing they had a third hand just to keep things under wraps.

Says Brown, "Get rid of those hospital gowns and let people wear something that is more comfortable for them to walk around in." She tells of one study participant, an older woman, who wrote a page-long diatribe about the gowns on the back of an interview transcript.

There's also a politically touchy issue: The federal Centers for Medicare and Medicaid Services (CMS), which pays for much of the hospital care received by older people in the U.S., introduced a rule in 2008 that holds hospitals to a zero-tolerance standard when it comes to falls. CMS will not pay for care for injuries related to falls. Brown says the rule has reinforced a hospital mindset that discourages mobility, partly out of concern over falls. "The hospital culture in most places has become, no, we don't get them up because something bad might happen to them." VA is less affected by the rule than are private hospitals, but the culture is pervasive just the same, says Brown.

Another VA researcher, Ronald Shorr, MD, director of the Geriatric Research, Education and Clinical Center at the Gainesville VA Medical Center and a professor at the University of Florida, has a grant from the National Institute on Aging to study the effects—and perhaps unintended consequences—of the CMS rule in U.S. hospitals. For example, are hospitals resorting to physical restraints to try and banish falls? A preliminary analysis by the group found a "small but statistically significant" downward trend in falls just before the new rule kicked in. Now they are looking at what has ensued since it's been in effect.

Brown says she and Shorr and other geriatricians agree on the need to get older people up and about during their hospital stay. "As a group," she says, "those of us who have a really strong understanding of what happens to older people when they are confined to a bed, tend to not argue."

These experts in elder care insist that preventing falls and increasing mobility during hospital stays are not mutually exclusive goals. Rather, they go hand in hand: Boosting movement can help maintain balance and strength—key factors in fall prevention.

Some doctors have other views. They are wary of what they see as the risks of nudging patients out of bed. Brown recalls the cynical comment of one peer who reviewed a grant proposal of hers, for a mobility intervention: "I don't see the point of this study. The patients are in the hospital only three to five days, so what difference does it make?"

Meanwhile, Brown makes progress where she can, challenging the entrenched hospital habits that seem most amenable to change. A recent trial of a walking program at the Birmingham VA Medical Center yielded promising results (see sidebar).

Some of the measures she pushes for—and has tested—seem like small steps. But they may eventually pay off in a big way for patients.

"So much of it is common sense," Brown reflects. She adds, only half-jokingly, "I've got a whole career based on common sense."