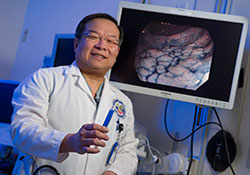 Dr. Roy Soetikno of the VA Palo Alto Health Care System is working to teach other gastroenterologists about a colonoscopy technique that studies show can improve early detection of cancer. It involves spraying a blue dye into the colon. (Photo by Curt Campbell)

Roy Soetikno, MD, a gastroenterologist at the VA Palo Alto Healthcare System and Stanford University, calls it a "tragedy" that cancer is missed in about 1 in 6 people with ulcerative colitis who undergo a colonoscopy. Many of those people will die from the cancer.

He says there is an answer. It's a colonoscopy method his team learned from Japanese doctors. Soetikno and his VA colleagues—including gastroenterologists Tonya Kaltenbach, MD, and Kenneth McQuaid, MD, and pathologist Robert Rouse, MD—are now working to disseminate the method in the U.S. They point to evidence it can save lives.

The technique involves spraying the colon with a blue dye to make it easier to find abnormal growths. Soetikno and colleagues describe the method in the June issue of the professional journal Gastroenterology. The article includes statistical evidence on the technique's effectiveness, along with instructional videos, a procedural flowchart, and other practice guidelines for doctors. The team hopes the materials will raise awareness and lead to practice changes among U.S. gastroenterologists, in VA and beyond.

In 2008, Soetikno and his Palo Alto team published study results in the Journal of the American Medical Association showing that flat or depressed lesions, once thought common only in Asian populations, were actually common in the U.S. as well. The lesions appear as "pancakes on the floor [of the colon]," says Soetikno, and may harbor cancer. Standard colonoscopy often fails to find them. The procedure works well to find pre-cancerous polyps—small raised knobs of tissue. Locating the non-polyp flat lesions is trickier. But the dye helps.

"The dye fills the crevices and glands of the colon," explains Kaltenbach, also with VA and Stanford. "It highlights the border of the flat growths and the abnormal pattern of their glands." The initial spray is done with diluted dye. Once a growth is spotted, a more concentrated dye solution is applied. If the lesion still looks suspicious, it is snipped out with the colonoscopy tool and sent to the lab to be checked for cancer.

The dye technique—technically known as chromoendoscopy—is especially effective for those with ulcerative colitis, a form of inflammatory bowel disease. It affects about 700,000 Americans, including up to 1 in 200 VA patients, says McQuaid, with VA and the University of California, San Francisco. The disease increases the risk of colorectal cancer. In this population, flat lesions are more common than polyps. Their growths are also harder to detect because of the damage the disease causes to the mucous walls of the colon.

"In these patients, unfortunately, the flat lesions are much harder to find because the lining of the colon is chronically inflamed. It's difficult to see the abnormal area," notes McQuaid. "The blue dye shows the borders and contours of the lesion."

Soetikno points out that research, including some European studies, shows that the dye method is vastly more efficient at finding cancer in at-risk patients than the conventional method: snipping out random samples of colon tissue for biopsy, "in the hope that one of them catches a growth."

In addition to learning how to perform chromoendoscopy, doctors have to learn how to recognize flat lesions. As part of their research, Soetikno's team has shown that training works to convey the required skills. They published a study last year in the journal Digestive Diseases and Sciences, based on colonoscopies of 462 patients, showing that doctors who had been trained to spot non-polyp growths did a better job of finding growths overall, and were three times more likely to find and remove the flat ones.

As a further incentive for doctors to adopt the dye method, Soetikno and his team have simplified it so it is easier to perform. For example, to deliver the dye into the colon, they use a washing pump that is part of the standard colonoscopy kit, rather than a special spray catheter. The added costs are low, says Soetikno—no more than about $20 worth of dye per patient, and only 11 minutes of extra time during the procedure. The payoff, though, is immense, he says: a "miss rate"—failure to detect precancerous lesions—that is a whopping 93 percent lower than with non-dye colonoscopy, based on the literature review his team conducted for the Gastroenterology article.

Soetikno notes that the dye method is now the standard of care in Europe and Australia for at-risk patients—namely, those with inflammatory bowel disease in the colon or rectum. He says "it is very unfortunate that the U.S. has not yet widely adopted the technique. The rate of missed lesions and cancers with standard colonoscopy is sobering. It should serve as a call to improve the quality of colonoscopy in IBD patients, who are at a higher risk for colon cancer."

He hopes gastroenterologists nationwide will take note of the new article and training materials. He says the statistical evidence backing the procedure is ample and robust, and that now is the time to change practice. "No one has stepped forward to provide the necessary training," he says. "We are trying to change that."

Soetikno's coauthors on the Gastroenterology article, in addition to Kaltenbach, Rouse, and McQuaid, include gastroenterologists from the United Kingdom, the Netherlands, and Japan.

To view a 2009 VA video that includes a segment on the work of Soetikno and colleagues, visit www.research.va.gov/news/videos.cfm and click on "Cancer Research."