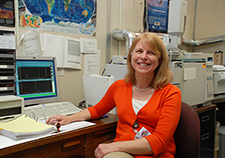 Dr. Christine Marx is with the Durham VA Medical Center and the Duke Institute for Brain Sciences. (Photo by Linnie Skidmore)

Dr. Christine Marx is with the Durham VA Medical Center and the Duke Institute for Brain Sciences. (Photo by Linnie Skidmore)

An estimated 22 Veterans commit suicide every day, and while the reasons why they choose to take their lives are often varied, there are some common risk factors: Alcohol, depression, pain, and other co-occurring conditions all can play a role in suicidal ideation.

Now VA researchers in Durham, N.C., say they have found something else that might contribute to suicide risk: changes in the levels of certain amino acids.

The study, published in the May issue of Military Medicine, involved 90 Veterans of Iraq and Afghanistan, 19 of whom reported suicidality (suicidal thoughts, behaviors, or plans) based on their scores on a standardized test. After administering the Beck Scale for Suicide Ideation to assess suicidality, the researchers collected serum samples and analyzed them for possible amino acid biomarkers.

There are two major neurotransmitter systems in the brainâ€”one inhibitory, the other excitatory. Excitatory amino acids such as glutamate are involved in learning and memory, but excessive concentrations are toxic to cells.

According to the researchers, the amino acids in question are integral to regulating mood and behavior, although understanding their exact relationships to suicidality will require further study.

"We're in the process of trying to replicate this in a group of 900 Veterans by the end of the summer, and it will be interesting to see how these findings can inform new therapeutics," says investigator Dr. Christine Marx, with VA and the Duke Institute for Brain Sciences.

"Patients with relative deficits in amino acids might benefit from restoration [of their levels], so we're looking at it in terms of future therapeutic drugs," she says.

Marx cautions against purchasing over-the-counter amino acids because those products are rarely regulated by the FDA and can often contain varying concentrations of the advertised product, or they may contain additional ingredients.

"We don't recommend purchasing over-the-counter amino acid supplements in lieu of seeking treatment," says Marx. Her colleague Szabo agrees, adding that continued research on the nature of the problem is crucial:"If you look at the OEF-OIF era," he says,"these Veterans seem to be at a greater risk for stress-related disorders than the general population. They have higher rates of mood, anxiety, and traumatic disorders, and it's important to get to the bottom of that and treat it."

It's not just treatment the team is looking for, but ways to identify at-risk individuals prior to a traumatic event.

"In cardiology, if you go to the doctor with chest pain and your troponin levels are up, we know you had heart damage and we can determine how best to intervene and project a long-term prognosis. In psychiatry we don't have any of those biomarkers," says Marx."But findings like these could have that potential. Can you imagine how many people could be saved if we had an actual physical biomarker for suicide risk?"