What goes awry in the suicidal brain? Studies zero in on faulty protein 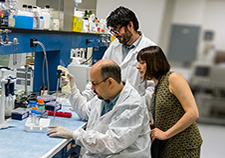 Some researchers sift through databases to find clues on why people kill themselves. Are certain diagnoses the main culprits? How about bad childhood experiences?

As a molecular biologist, Dr. Stella Dracheva takes a different tack: She studies the very tissues and cells of the brains of suicides. And she's found a unique trait in the brains of those who actually commit the act. It's something not seen in other brains, even those of people who in their lifetime had strong suicide risk factors like major depression.

Dracheva's latest study, published online April 29 in Human Molecular Genetics, builds on her group's previous work in which they showed how a molecular process called RNA editing churns out a faulty form of serotonin receptor.

RNA is the "middle man" that translates DNA into specific proteins to carry out functions throughout the body. When RNA gets edited, the blueprint changes, resulting in a different end product—a slightly different protein.

Normally, serotonin, made by neurons in one part of the brain, gets distributed throughout the brain and binds to proteins called serotonin receptors. Those receptors get activated and affect functions from mood regulation to sex and eating.

Some receptors, though, are mute. They do a poor job of responding to serotonin. Flood them with serotonin, and they still remain dormant. That, says Dracheva, is a hallmark of suicides' brains.

Receptors that can't react to serotonin

"These proteins are almost completely silent. They function poorly. They can't react to serotonin at all," says the scientist, based at the James J Peters VA Medical Center in the Bronx, New York.

There are 16 different types of serotonin receptors. One of them, the 2C receptor, is especially versatile. It controls a wide range of processes throughout the body. It's also the one prone to being muted and dysfunctional, the result of heavy RNA editing. Says Dracheva, "The more the receptor is edited, the more it is silent."

Suicides' brains have significantly more of this silent "isoform" of 2C receptor than brains of people who did not commit suicide, says Dracheva.

Her group previously looked at postmortem brains from people who had suffered with depression, bipolar disorder, or schizophrenia—all linked to suicide risk. Only the brains of those who had actually died of suicide, however, showed high levels of 2C receptor editing—and accordingly, lower receptor activity.

The silent receptors were detected in the area of the brain called the prefrontal cortex, which, says Dracheva, "is important in cognition and complex behaviors such as impulsivity and aggression."

In the brains of those with depression, says Dracheva, 2C receptor editing is lower than normal. The result is 2C receptors that are more sensitive and reactive to mood-lifting serotonin. She says it may be the body's attempt to adapt, to compensate for the depression. "However, in suicides with the same diagnosis [depression], I don't see the same effect. The editing level is not adjustable."

In general, explains Dracheva, RNA editing is like a valve the body can use to adapt to inborn or environmental stressors. By dialing down the editing, the body can make brain cells more active and thus enable them to handle the stress. It's this adaptive mechanism that is likely broken in the suicidal brain, she theorizes.

Dracheva is part of a multidisciplinary team at the Bronx VA's Veterans Integrated Service Network (VISN) 3 Mental Illness Research, Education and Clinical Center (MIRECC). She says she's learned from her clinical colleagues that impulsive aggression is a trait common in those who take their own life. "It has a biological basis," she says. Based on her findings with suicide brains, she theorizes that if she were able to chemically analyze the brains of those with impulsive aggression, she would see "this same editing pattern—higher editing, lower receptor activity."

So far, it's not clear how the molecular finding can be translated into the clinic to stem actual suicides. According to VA estimates, some 22 U.S. Veterans take their life each day. The problem has plagued the military as well, although the exact reasons underlying the trend are still being investigated. One Department of Defense and VA study reported in JAMA in 2013 countered the popular notion that it is primarily combat traumas or long, repeated deployments that directly drive the trend; rather, the report pointed to more common suicide risk factors such as depression and alcohol abuse. "The increased rate of suicide in the military may largely be a product of an increased prevalence of mental disorders in this population, possibly resulting from indirect cumulative occupational stresses across both deployed and home-station environments over years of war," wrote the authors of that study.

In any case, having biological clues helps sort out the puzzle. Dracheva points to the multidisciplinary approach her group used as a key to progress on this front.

In addition to sequencing genes and RNA, and testing brain tissue for certain proteins, they leveraged clever computer models and analytic techniques. Using RNA from their postmortem brain collections, they compared the whole transcriptome—the entire set of RNA molecules—of different groups of subjects. The groups included healthy people and those with various psychiatric illnesses, both suicides and non-suicides. The researchers tracked which genes were expressed and which weren't. Which genes got transcribed to RNA and then translated into specific proteins? Which ones remained unexpressed, turned off? The team looked at patterns of RNA editing, also: Which brains showed high amounts of those highly edited, non-functional 2C serotonin receptors? How were these silent 2C serotonin receptors associated with expressed genes? They also measured an "epigenetic" marker in these brains—DNA methylation—that is influenced by the environment. The question here was, how may have environmental stressors affected gene expression and editing?

"Suicide is a complex phenomenon," says Dracheva. "Only by using a very sophisticated combination approach were we able to find associations between genetics, epigenetics, gene editing, and gene expression. We've been able to find some very good leads."

Her group boasts scientists from several disciplines: bioinformatics, computational biology, neuroscience, psychiatry, molecular biology. They come from VA, Mount Sinai School of Medicine, the University of Pittsburgh, and the National Institutes of Health.

The overall approach is sometimes called "systems biology." It's a biomedical twist on the big-data trend sweeping many industries today. Using powerful mathematical models and computer simulations, biomedical researchers can now explore tens of thousands of genes and their downstream effects involving RNA and proteins. They can find links between biochemical pathways that no one had connected previously. What used to take years now takes days—plus lots of ingenuity.

Will an obesity drug figure in suicide prevention?

Armed with evidence of the role of the 2C receptor in suicide, Dracheva's group and her colleagues are thinking ahead to clinical trials. One possibility may come from an unlikely sector: obesity research. A drug called lorcaserin, sold as Belviq, was approved by the FDA in 2012 to help people lose weight. It works by activating the 2C receptor—the same effect that less RNA editing would have. (Remember, serotonin, particularly through the 2C receptor, plays a wide variety of roles in the body, including appetite regulation. If you've ever wondered about the connection between food and mood, just think about serotonin.)

"We're looking very closely at the pharmacology and safety of Belviq to see if it can potentially be an intervention for suicidal behavior," says Dracheva. She expects a proposal for a clinical trial to be in the works soon. She says her team's biomedical work may help justify the case for the drug's potential role in suicide prevention.

Here too, Dracheva stresses the importance of a multidisciplinary approach. "Our MIRECC has an extensive translational program and is designed to function from 'bench to bedside,'" she says. Moving seamlessly between the lab and the clinic, says Dracheva, is a huge plus of her VA research setting. She says combined with the range of specialties found on her biomedical team, it makes for ideal science.