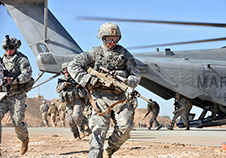 Together, they are known as the "polytrauma clinical triad." The three conditions co-occur—often along with other injuries—in about 4 in 10 Veterans receiving polytrauma care in the VA system. The troublesome triad affects thousands of other combat Veterans, as well.

There is research to suggest that each of the conditions by itself may raise the risk of suicide. What about all three combined?

VA and university researchers analyzed data on more than 211,000 Veterans of the wars in Iraq and Afghanistan to explore that question. The findings appeared online July 17, 2014, in the American Journal of Public Health.

"Much of the association between the polytrauma clinical triad and suicide appears to be driven by PTSD, especially when PTSD is also accompanied by depression or substance abuse," says Finley.

Pain by itself was not associated with higher suicide risk—in fact, it appeared to decrease the risk slightly. When pain was accompanied by mental health diagnoses, however, the risk did go up.

Overall, notes Finley, "The presence of the polytrauma triad did not raise the risk of suicidal behavior any more than PTSD, depression, or substance abuse alone."

By the same token, she says, "When you add depression or substance abuse to PTSD, this significantly raises the risk over what PTSD alone does."

For purposes of the study, the researchers tracked only suicidal thinking or attempts, not actual suicides. About 2.7 percent of the study population had such a history documented during the study period, fiscal 2009 through 2011.

The researchers analyzed a wide range of clinical, demographic, and military variables—such as age, race, and Guard or Reserve versus active duty—to see which were more common among those with suicidal behavior.

The team looked at the three conditions that make up the polytrauma triad, alone and in combination. They also considered known suicide risk factors such as depression, substance abuse, bipolar disorder, and schizophrenia.

Among the findings: Compared with Veterans who had no record of TBI, PTSD, pain, depression, or substance abuse, those who had the polytrauma triad were at nearly twice the risk for suicidal thinking. Compared against the same reference group, those who had only PTSD were at slightly more than twice the risk.

Finley says the findings underscore the major role that PTSD plays in suicide risk, and validate VA's strong focus on screening for and treating the condition. Along with that, she says, "These findings suggest that it's equally important that we make sure all Veterans receive appropriate screening and treatment for depression and substance abuse."