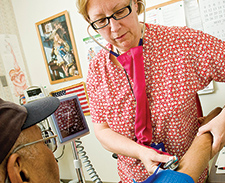 Nowadays, many primary care practices use "physician extenders" such as physician assistants and nurse practitioners. The idea is to relieve physicians of more routine duties. It's part of a shift to the medical home model, which relies on teams of providers and is the inspiration for the "patient-aligned care teams" now standard in VA.

But it's still fairly rare for registered nurses (RNs) to manage protocols such as adjusting the dosage of a medication or ordering a lab test.

When they do, however, patients tend to benefit. That's the gist of a review study by a team at the Durham VA Medical Center and Duke University, published July 15, 2014, in the Annals of Internal Medicine.

"We found that there are positive effects for patients with chronic conditions—such as diabetes or high blood pressure—when nurses take on these higher-level duties, outside of what is usually considered their scope of practice, using protocols that are clearly defined and based on evidence," says lead author Dr. Ryan Shaw, himself an RN. "It appears to be an effective approach that can be adopted widely in primary care, especially in the context of the 'medical home.'"

Shaw is an assistant professor in Duke's School of Nursing and a researcher at VA's Center for Health Services Research in Primary Care.

Shaw's group systematically reviewed and analyzed the combined data from 18 past clinical trials in which nurses, under supervision, had adjusted the dosage of medications originally prescribed by a physician. The studies included more than 23,000 patients in all.

Many of the published studies lacked information on the nurses' level of training, or how exactly they managed patients' care. They also tended to omit details such as cost, or how well patients adhered to the nurses' recommendations. Even with those limitations, a clear picture emerged attesting to improvements in patients' chronic diseases.

A similar story was seen with blood sugar levels. Ten randomized controlled trials, and two non-randomized trials, looked at this outcome for patients with diabetes. While the results were more variable than with blood pressure, overall there was an average decrease of .4 percent in patients' levels of hemoglobin A1C—a measure of blood sugar.

Shaw says similar benefits might be attainable with greater involvement of other care team members, such as clinical pharmacists. But he points out that RNs are the largest group among health care workers. There are 2.8 million RNs in the U.S., compared with about 200,000 primary care doctors. As such, Shaw and his coauthors wrote, "[RNs] are in an ideal position to collaborate with other team members in the delivery of more accessible and effective chronic disease care."

Dr. Sandeep Jauhar, a cardiologist at Long Island Jewish Medical Center and New York Times columnist, coauthored an editorial accompanying the article by Shaw's group. The piece stressed the notion that "outpatient medicine has become too complicated for physicians to handle by themselves," and that nurses should play a greater role. With regard to chronic diseases such as hypertension and high cholesterol, Jauhar told Reuters Health: "These are conditions for which there are pretty well-defined flowcharts for how to manage [them], so for those relatively straightforward conditions, I think that nurse-managed protocols are perfectly acceptable."