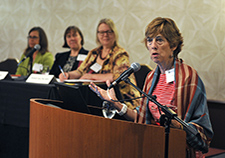 When VA was founded in 1930, the U.S. military was a different place. Mounted cavalry units still had a place on the battlefield. The U.S. Army's main battle rifle, the M-1903, was a slow-shooting 8 1/2-pound bolt-action rifle. The Air Force wouldn't be established for another 17 years and women, relegated mostly to clerical or nursing jobs, made up a miniscule percentage of the force.

How times have changed.

Fast forward 84 years and women now make up more than 15 percent of the U.S. military. More than 20 percent of new recruits are women and the list of careers open to them now nearly matches that of their male counterparts. More than a dozen have already passed the vaunted Marine Corps enlisted infantry school.

With this change has come a requirement for VA to adapt to something it was never designed for—women Veterans.

Women's health research on the rise

"This system was designed and built for men. Our challenge is to show the foundation can work for women as well," said Dr. Carolyn Clancy, VA's interim under secretary for health, at the third Women Veterans Health Services Research conference in Arlington, Va., in late July. The two-day conference, funded by VA's Health Services Research and Development (HSR&D), brought in hundreds of researchers, policymakers, and clinicians from across VA and the Department of Defense.

On hand in the packed ballroom at the Crown Plaza hotel were dozens of presenters on topics ranging from military sexual trauma to unemployment and homelessness among women Veterans. Their aim: to increase partnership, not just between federal organizations and academia, but among researchers as well.

"The most important thing we're trying to promote here in terms of health care research is a collaborative approach," said Dr. David Atkins, the director of HSR&D. "It doesn't make sense for a researcher in San Francisco to be working on the same topic as a researcher in Baltimore and not know what the other is doing. Researchers are busy. They can't keep up with everything, not even in their own field, but they need to be able to share and exchange ideas. These face-to-face meetings really allow us to focus on an issue of great importance." 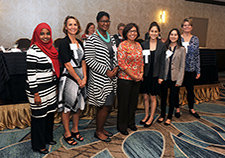 With more than a million Veterans expected to leave the military in the next few years, VA anticipates an unprecedented number of women will be arriving at VA medical centers and clinics with needs that do not always match what VA is accustomed to providing.

"Women Veterans have gender-neutral and gender-specific needs," said Dr. Patricia Hayes, the chief consultant for Women's Health Services in VA's Office of Patient Care Services. "They're younger than our male Veterans and many have the burden of child care and elder care more so than male Veterans. The challenge is to meet the right health care needs in a system that can be agile enough to deal with them [during] the hours they're available and with the right specialty care services."

Those services cover areas like orthopedics and prosthetics in which providers, accustomed to men's musculoskeletal issues, might be out-of-practice when it comes to the unique needs of women. "The prosthetics fit differently for women. Their weight bearing is different. Their pelvis is different. Cardiology, neurology, endocrinology, reproductive mental health—all of these are issues we have to make sure we're trained to provide not just to men, but to women as well," said Hayes.

In the case of reproductive mental health, a relatively new field, Hayes says women Veterans who are pregnant and have posttraumatic stress disorder, depression, or other mental health problems must navigate a difficult process between VA mental health care and their reproductive care, which is most often handled by an outside provider but paid for by VA. "We have to find the right medication for pregnant women, or women trying to become pregnant, and ensure our mental health providers are confident enough to reach out to external providers to advise them," said Hayes. 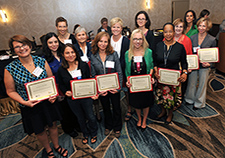 After being recognized for their research, VA investigators pause for a photo at the 2014 VA Women Veterans' Health Services Research Conference. (Photo by Robert Turtil)

After being recognized for their research, VA investigators pause for a photo at the 2014 VA Women Veterans' Health Services Research Conference. (Photo by Robert Turtil)

Though there is a great deal of work to be done, VA is expanding its ability to care for women. Already 97 percent of VA medical centers and 82 percent of community clinics have a designated women's health provider. "When you think about where we've gone in the last 14 years, it's remarkable growth," said Dr. Clancy. This presence of women's health specialists "is critical [to ensuring] women Veterans receive primary care from a provider proficient in women's health, regardless of where they go," she said.

"You can't just adjust away for gender in our research," said Dr. Elizabeth Yano director of the HSR&D Center for the Study of Healthcare Innovation, Implementation and Policy, based at the VA Greater Los Angeles Healthcare System. "You have to figure out what the issues are for women Veterans and try a new strategy."

That means ensuring women are represented in research studies—something VA already does—to determine, for example, that pharmacological doses are informed not just by size or weight, but also by gender differences.

Another example is VA's MOVE! weight-management program. "We have to understand that some women Veterans, particularly those affected by PTSD or military sexual trauma, may not want to exercise in front of male Veterans. We need our providers to be aware of these things," said Yano.

For Yano, Hayes, and other leading women's health representatives within VA, that means developing and implementing policies and practices that ensure women Veterans receive the care they need and deserve.

"VA is an incubator of ideas," said Yano. "Most researchers just hope someone notices their work, but [in VA] we have the capacity to transform our evidence-based practice into evidence-based policy."

For example, after recognizing that some researchers were encountering difficulties finding adequate sample sizes of women Veterans for their studies, or connecting with mentors, HSR&D funded the development of the VA Women's Health Research Network. The network is building capacity for women's research throughout the VA system.

Like research, VA services for women are expected to continue to expand.

Hayes: "These are our women. In the next 5 to 10 years, VA will be able to reach out to them. They won't have to reach in. We'll be able to give women an appointment, with a provider of whatever gender they prefer, locally. There will be a designated women's health care provider on site [at every VA medical center and community-based outpatient clinic]. The system will have figured out how to provide the best, Veteran-driven care for our women. If we build it with them, they will already be here."

For more information on VA care for women, go to www.va.gov/womenvet or call 1-855-VA Women.

To view a brief video about the meeting, visit www.blogs.va.gov/VAntage/15092/conference-looks-to-advance-womens-health-research-within-va .

Women's health research on the rise

In the last five years there were more scientific papers published on women Veterans than in the previous 25 years combined. The 2014 VA Women's Health Services Research Conference built on that trend, with nearly 100 presentations on studies covering the gamut of women Veterans' care.

Another study, on women Veterans' perspectives on VA health care, sought to understand why women continue to underuse VA care. By interviewing nearly 250 women Veterans, the researchers identified several methods for better engaging women Veterans, including the use of informal social networks and the expansion in VA of gender-sensitive care.

To that end, researchers studied the implementation of gender-sensitivity training for VHA providers and other employees. By comparing traditional online workplace training with a specific evidence-based method, researchers were able to identify a better way to educate VA employees. The improved method led to significantly higher scores in gender sensitivity and knowledge.

Other studies shared at the meeting included a 10-year review on the disease burden of women in VA care, research into suicide risk among female OIF and OEF Veterans with mental health problems, and a survey of women Veterans' experiences with pain management care in VA.