Are computers a third wheel in the exam room? VA research looks at clinicians' use of electronic health records 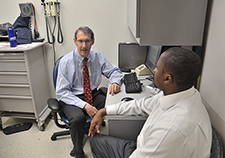 Dr. Howard Gordon, seen here with Air Force Veteran and VA employee Kevin Harris, says it can be a challenge when exam-room ergonomics force physicians to turn away from patients to use the computer. (Photo by Robert Gonzalez)

Dr. Howard Gordon, seen here with Air Force Veteran and VA employee Kevin Harris, says it can be a challenge when exam-room ergonomics force physicians to turn away from patients to use the computer. (Photo by Robert Gonzalez)

Saleem, who conducted the study while working as a research investigator at the Richard L. Roudebush VA Medical Center in Indianapolis, observed and interviewed 20 care providers in three geographically distinct VA medical centers to see how they were using the VA's electronic health record, the Computerized Patient Record System (CPRS).

VA is currently redesigning CPRS into a next-generation health record and, as part of that transformation, is incorporating end-user feedback into the process.

Saleem's study, published in the February 2014 issue of the Journal of the American Medical Informatics Association, applied human factors engineering research in an effort to improve the program design. "In a nutshell," describes Saleem, "we took into account human cognitive and physical capabilities and limitations, because if you're going to ask doctors and nurses to use the electronic health record, when every minute counts, then you'd better design it with them in mind."

The EHR and the clinical encounter: Tips, insights, caveats from three physician-researchers

Clinicians vary in how they use computer

"The most surprising thing we discovered was the sheer amounts of variation in how primary care providers are using the computer," says Saleem. "It varies not only by medical center, but by clinics and even individual physicians and nurses. Some physicians are adept and prefer to use it while they're with a patient, while others won't touch the computer when they're with a patient."

Ease of use, or, as Saleem describes it, the walk-up factor, of the CPRS is something that came up consistently in the interviews. "Ideally these systems should be very easy to use," he says. "If they're overly complex, then that's a problem because for the most part, there is only a minimal amount of training available for new staff or residents to use the electronic health record."

In addition to interface redesign and changes to drug, disease, and allergy alerts, Saleem and his team were also able to identify some best practices for primary care providers who regularly use the CPRS.

"Physicians who use CPRS before a patient encounter were more prepared and didn't have to focus as much on the computer during the encounter," says Saleem. "That was a major benefit." The study also suggests that physicians who started their documentation while they were with a patient were able to save time and avoid mistakes, relative to those who waited until after an encounter to enter their notes.

'Show them the results'

Saleem has some additional advice for clinicians on how to use the computer to maximum advantage: "The main thing is to think of the computer as a third party that can mediate between the provider and patient. So if you're talking about lab results, use the computer to communicate that to patients. Show them the results."

Understanding how different providers with varying workflows are using the CPRS is key, according to Saleem, to ensuring the next version provides both physicians and patients with what they need.

"When a Veteran comes in to see their primary care provider, they only have a limited time there," says Saleem, "and if we're taking up that time working through a computer, we're eating up the time that provider has to focus on the Veteran and their medical concerns."

The EHR and the clinical encounter: Tips, insights, caveats from three physician-researchers

"I was with the VA in Durham, (N.C.) and it was my very first experience with electronic medical records for prescribing. I couldn't believe how great it was. With a click of the mouse I could print out all 12 prescriptions and sign them." Schwartz, who was a coauthor on Saleem's study, has also conducted extensive research into the way electronic medical records are used and how patients feel about them. In a 2007 article published in the Journal of General Internal Medicine, Schwartz showed that medical residents were more likely to experience challenges using computers than were their more experienced colleagues.

"This isn't something they're teaching," says Schwartz. "Fortunately, the VA EMR is largely intuitive. But still, it's definitely something you learn on the job."

For his part, Schwartz recommends that physicians locate their computer in such a way that they sit shoulder to shoulder with their patients. "I use graphs to trend their vitals or to show them results. That's a great patient education tool, plus it's something I can easily print out for them to take with them," says Schwartz, who says he uses VA's EMR before, during, and after patient interactions. "I don't have to rely on their memory, or frankly, my own. We have a written record that's easy to understand and accessible. That helps the patient build trust in me and in the health care center."

Still, Schwartz is adamant that physicians not forget what their ultimate goal is. "The patient is the one with the problem. Keep the central focus on healing and connecting with the patient and ensure you're working with them. You don't want to focus too much on the computer."

Dr. Howard Gordon started out with paper charts. Now a staff physician at the Jessie Brown VA Medical Center in Chicago and associate professor at the University of Illinois at Chicago, he says the biggest advantage of electronic records is that, unlike paper charts, they are almost always available and easy to pull up.

"I use it on a regular basis in my patient encounters," says Gordon of VA's electronic medical record. "I review the record before seeing the patient. That's something I think most doctors do."

Gordon is quick to point out that there are challenges. "Most of the exam rooms were designed and built before anyone thought we'd be putting computers in them," he says. "As a result, the ergonomics aren't always there, and sometimes you just can't help but look away from a patient in order to research something or to put in a note. It creates a real problem when you have to turn around and face away from the patient."

Not engaging is the problem, though, not using the computer, says Gordon. "Before electronic records, doctors took notes. No on Dr. Howard Gordon, seen here with Air Force Veteran and VA employee Kevin Harris, says it can be a challenge when exam-room ergonomics force physicians to turn away from patients to use the computer. (Photo by Robert Gonzalez)e complained because it's easier to take notes on a piece of paper and look at the person while you're writing. But for efficiency, or to explain something to the patient, the computer is better for quickly showing a graph of lab results or for pulling up an X-ray."

Gordon even uses the computer to an advantage that it wasn't necessarily designed for. "Sometimes you can use it to encourage a patient to talk more." Gordon says he asks patients to continue talking when he is searching for something or putting in orders. "It maintains efficiency of time and keeps things moving, and sometimes you hear things you otherwise might not have."

Dr. Erin Krebs , the Women's Health medical director at the Minneapolis VA Health Care System, has been using VA's medical records since her residency training began 14 years ago. But that doesn't mean she relies on it during patient encounters.

"I prepare my notes in advance, like an outline," says Krebs. "I use it [the Computerized Patient Record System] to remind myself of what I want to discuss before a visit, but when I'm with a patient I don't use it very much for taking notes. I do those at the end of the day."

Krebs, who is also an associate professor of medicine at the University of Minnesota, says she uses the CPRS mainly to go over labs with a patient or to review trends, like weight loss or gain. "During my training I also worked in places that were mostly paper-based and we spent a lot of time running around after patient charts, so it's wonderful having everything in the same place."

Nevertheless, she feels the system needs to be used thoughtfully whenever a patient is in the room. "I do research on chronic pain management and in many cases, people comment on whether doctors are making eye contact," says Krebs. "That's a common example given for whether or not a doctor really cares or is listening. If you're typing, you're probably not looking directly at the patient or giving them those signals that you care."

"The patient should be the main focus of attention. If the EHR helps, then great, but if it distracts, then save it for after the visit."