Don't pick a fight with a superbug 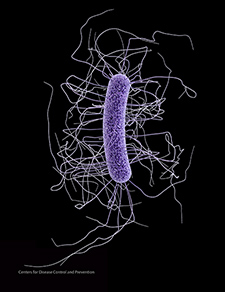 Strains of C. difficile that are resistant to antibiotics may be pushed to spew out more toxins—and become more dangerous—when they are exposed to relatively low doses of the drugs, suggests a VA study. (Illustration: Centers for Disease Control and Prevention)

Strains of C. difficile that are resistant to antibiotics may be pushed to spew out more toxins—and become more dangerous—when they are exposed to relatively low doses of the drugs, suggests a VA study. (Illustration: Centers for Disease Control and Prevention)

Antibiotics save lives. But sometimes they cause death.

Each year, some 14,000 Americans die after getting infected with a germ called Clostridium difficile. In almost all cases, the infection follows antibiotic treatment, either during a hospital or nursing home stay or through a doctor's office in the community. A USA Today report in 2012 claimed the death toll is much higher, around 30,000.

Many more Americans—up to a half-million—get infected after medical care and antibiotic treatment and suffer with symptoms that range from mild to severe. They include diarrhea, abdominal bloating and pain, nausea, fever, and inflammation of the colon.

By all accounts, C. difficile, or C. diff for short, is a public health menace, and things have been getting worse over the past decade or so. That's because of the emergence of a super-virulent strain of the bacteria known as BI/NAP1/027. The strain is highly resistant to antibiotics and spews out more toxins than its less aggressive sister strains.

What to do? A team at the Boise, Idaho, VA Medical Center recently published a study in the Journal of Medical Microbiology that offers new insights on the threat. It suggests that certain antibiotics may be even more dangerous than previously thought, in terms of worsening the C. diff trend. And it adds new urgency to the campaign underway in U.S. hospitals to use antibiotics far more sparingly than in the past—especially in light of studies showing that up to half these prescriptions are inappropriate in the first place.

The new study out of Boise adds to the conventional notion that C. diff takes hold in the gut simply because antibiotics kill off "friendly" bacteria that normally compete with it. There's something more going on, suggests lead author Dr. Michael Aldape, with the Infectious Diseases Research Group at the Boise VA. 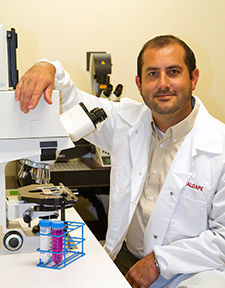 Dr. Mike Aldape is with the Infectious Diseases Research Group at the Boise VA Medical Center. (Photo by David Frazier)

Dr. Mike Aldape is with the Infectious Diseases Research Group at the Boise VA Medical Center. (Photo by David Frazier)

"Not only do antibiotics wipe out gut flora, but they can also coax C. difficile organisms into producing toxin," he says.

Research in Aldape's lab shows it's the very antibiotics that in some cases are being given to treat C. diff that may be provoking it to unleash illness-causing toxins. Some strains of the germ—which is naturally found in the environment, and is even among the microorganisms in a healthy intestinal tract—are perfectly harmless. But increasingly, in the face of ever-growing antibiotic use, the bacteria are showing their nastier side. Not only is heavy antibiotic use enabling the development of resistant strains of C. diff, says Aldape, it may also be leading to more toxic and lethal ones.

"Antibiotics could actually contribute to a worse outcome by stressing C. difficile organisms, resulting in an offensive retaliation—that is, toxin production," he says.

The idea is not entirely new; it's been suggested in some past studies. But now the Boise VA lab has shown it to be the case with a more recent—and highly toxic—strain of C. diff.

Aldape and his team, including Dr. Dennis Stevens, chief of infectious diseases at the Boise VA, exposed two different sub-strains of C. diff to low doses of the drug ciprofloxacin (sold as Cipro). The drug is one of the fluoroquinolones, a class of broad-spectrum antibiotics. From the late 1980s they have been a mainstay of treatment for respiratory and urinary infections. Only recently have hospitals been starting to back away from their use, weary of their link to C. diff, and turning to newer antibiotics.

The two sub-strains used in the study both belong to the virulent BI/NAP1/027 strain. One was older, and less resistant to ciprofloxacin. The other was more recent, and more resistant.

The researchers intentionally used a low dose of the antibiotic that would not kill the bug, but merely provoke it. Think of kicking a schoolyard bully in the shin instead of knocking him out with a punch. The move would likely only make him madder and put him into full attack mode.

That's what played out in the lab test. The newer, highly resistant strain kicked back with ferocity. It doubled its output of toxins A and B—the illness-causing proteins manufactured by C. diff in the gut—compared with bacteria not treated with the antibiotic at all. Notably, this happened earlier in the germ's lifecycle. Translate this to an actual health care scenario, and you have infected patients getting sicker earlier.

The lab cultures containing older, less resistant strain responded favorably to the antibiotic. They reduced their toxin output. And there was no change in when toxin production occurred during the bacterial lifecycle.

Aldape says the experiment reflects the reality faced by doctors every day in clinics and hospitals. They don't want to treat all cases of C. diff with large doses of antibiotics, because that would "lead to the development of highly resistant bacterial strains where no dose of [an antibiotic] would be effective," he says. So they tend to use lower doses. But for those patients who happen to be carrying resistant strains, the drug creates a "sub-inhibitory environment" that allows the bacteria to thrive and become more virulent. Says Aldape, "This would actually add to, not relieve, the C. difficile symptoms."

The lab study, says Aldape, suggests that resistance may be linked to toxicity. The same cellular pathways driving resistance to antibiotics may be driving increased toxin output.

"Our theory is that the mechanisms governing resistance also regulate the antibiotic-induced toxin production reaction," says Aldape. He and Stevens and their colleagues are applying for funding to further investigate the idea.

The work could help explain why super-toxic strains like BI/NAP1/027 emerge in the first place. And it draws more attention to the damaging effects of antibiotic overuse—in this case, ciprofloxacin in particular.

But even with newer drugs coming on the market, there's still room for concern, warns Aldape.

"At this point there are a handful of new antibiotics that have shown great promise in treating severe cases of C. difficile," he says. "However, like any heavily used antibiotic, there is a significant chance that any pathogen, with time, will develop resistance. "As such, he says, there's a "pressing need for the further development of new antibiotics to treat not only C. difficile, but all bacteria that cause infectious diseases."

At the same time, he endorses the medical community for starting to seriously examine its use of antibiotics on the whole.

"It's important for people to understand that antibiotics themselves, when used at a sub-inhibitory concentrations, can create an undesirable environment that may trigger an aggressive response by toxin-producing bacteria. We need to be aware that, depending on the circumstances—for example, the particular pathogen involved, the antibiotic used, and at what dose—we may actually be contributing to worse outcomes in patients with certain illnesses."

Equally important, he says, "Our use of antibiotics is also contributing to the selection of highly resistant strains of bacteria. Doctors and patients need to give these notions significant thought when considering antimicrobials as a means of therapy."