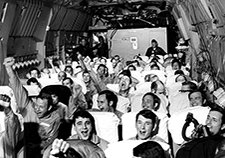 The findings appeared in June 2014 in Alzheimer's and Dementia: The Journal of the Alzheimer's Association.

"The findings from past studies on this topic have been mixed," says senior author Dr. Deborah Barnes, with the San Francisco VA and the University of California, San Francisco. "One reason could be that they didn't adequately control for other factors, such as PTSD, which by itself has been strongly linked to an increased risk of dementia. In our study, we were able to sort out the respective effects of POW status and PTSD."

Among the 484 Veterans in the study who had been POWs, about 80 percent were from the World War II era. The rest had served in either Korea or Vietnam. Overall, nearly a third of the POWs also had chronic PTSD.

All told, more than 142,000 Americans were POWs during the past century. About a third are still alive.

A 2002 VA report found a range of health problems among them that could be attributed to their harsh wartime experiences, which in many cases involved starvation, torture, and prolonged psychological stress.

Many were found to suffer from nutritional deficiencies, heart disease, gastrointestinal trouble, and mental health issues such as PTSD, psychosis, depression, anxiety, and obsessive compulsive disorder. The problems had persisted even decades after the Veterans' release and return home.

The new study made statistical adjustments for these and other health issues, as well as a range of demographic factors, such as age and income. The goal was to try and tease out the specific effects of the POW experience.

The researchers also controlled for the risk of death. In other words, some past studies may have found lower dementia rates among POWs, compared with non-POWs, only because POWs were more likely to have died before reaching the age when dementia becomes more common.

"We found about a 50 percent greater risk of developing dementia among the former POWs even after we adjusted for potential confounders and the competing risk of death," says Barnes. "There was an additive effect from PTSD, such that former POWs with PTSD had more than double the risk of dementia."

Several studies on PTSD have linked the condition with long-term anatomical changes in the brain—especially in the hippocampus, which is critical for memory. In fact, one VA study published in June 2014 in Psychiatric Research found that the longer PTSD lasts, the greater the changes. "We performed MRI scans on 55 combat Veterans with chronic and current PTSD, and we found a direct relationship between the duration of PTSD and loss of volume in the right hippocampus, even after we adjusted for age and many other factors," says study coauthor Dr. Kristine Yaffe, chief of geriatric psychiatry at the San Francisco VA, who also worked on the POW study.

The role of stress hormones

With respect to both PTSD and the POW experience, the researchers believe stress hormones also play a role. They say it's possible that the harrowing experience of being a POW takes a toll on the body's stress response system, permanently raising the output of cortisol. Chronically high levels of the hormone have been linked to memory impairment and other cognitive problems.

"A number of past studies have shown how cortisol release during extreme stress adversely impacts brain function, and the literature has also documented long-term effects from increased cortisol levels," says Barnes. "So it's quite possible that this is part of what is driving the increase in dementia risk later in life for former POWs."

The authors say the new findings provide more information to help VA and other providers ensure proper care for former POWs as they age.