ORD Home » Currents » Summer2014  »  What the heart can tell us about the mind: Heart rate variability and PTSD

What the heart can tell us about the mind: Heart rate variability and PTSD 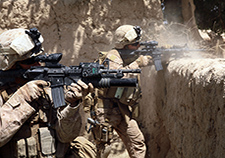 Two Marines with 2nd Battalion, 8th Marine Regiment engage in an operation in Helmand province, Afghanistan, in 2009. Four battalions of Marines took part in a VA San Diego study on heart rate variability, which researchers say is a good measure of the body's fight or flight system. (Photo by Sgt. Pete Thibodeau/USMC)

Two Marines with 2nd Battalion, 8th Marine Regiment engage in an operation in Helmand province, Afghanistan, in 2009. Four battalions of Marines took part in a VA San Diego study on heart rate variability, which researchers say is a good measure of the body's fight or flight system. (Photo by Sgt. Pete Thibodeau/USMC)

A car's ability to stop and start—to accelerate on demand and then idle at a stoplight without trouble—are measures of its health. A car that stalls or jerks is a sure sign of trouble. So it goes for the human heart and, according to a study of 2,430 Marines, heart rate variability can tell a lot, not just about physical health, but about depression, posttraumatic stress, and the effects of deployment on the body and mind.

"Heart rate variability is quite simply the variation in the interbeat intervals of our heart," says Dr. Arpi Minassian, an associate clinical professor of psychiatry at the University of California, San Diego. "It is a very sensitive index of the health of our body's stress response systems. It's one way to measure the health and fitness of the fight or flight system."

Minassian and her colleagues Drs. Mark Geyer, Dewleen Baker, Caroline Nievergelt, Daniel O'Connor, and Victoria Risbrough, all of whom are affiliated with the San Diego VA Health Care System and its Center of Excellence for Stress and Mental Health, recently tested four infantry battalions of active duty Marines before a combat deployment. The work was part of the larger Marine Resiliency Study.

The Marines, more than half of whom had already deployed to Iraq or Afghanistan in the past, were assessed for both depression and posttraumatic stress disorder prior to having their heart rate variability monitored. The researchers then placed a device onto each participant's finger for five minutes while he relaxed. The sensor recorded the interval between each heartbeat.

"In five minutes you can tell a lot about a person's heart rate," says Minassian. "Every time we inhale, for example, our pulse quickens. When we exhale, it slows down. That is heart rate variability. We do it every time we take a breath."

She adds: "Say you're a runner in good shape. When you're on the treadmill, your heartbeat will go up. When you stop running, if you're in good physical condition, your heartbeat should drop back down pretty quickly. Your heart is able to respond quickly to get you out of a stressful situation, but after that situation has passed and you need to get back to normal functions, your body should respond flexibly. For those people with lower heart rate variability, it suggests an inflexible response."

The study, published in the May 2014 issue of Psychosomatic Medicine, found that not only did Marines with prior deployment experience have lower heart rate variability, but that even when researchers controlled for depression and other variables, participants who screened positive for PTSD still had lower variability in their heart rate.

Previous studies have already tied heart rate variability to mental illnesses such as schizophrenia, depression, bipolar disorder, panic disorder, and PTSD, but Minassian' s goal was to single out PTSD and see whether or not the relationship was caused by some other condition or experience. "Even when we controlled for other issues, we still saw a relationship between heart rate variability and PTSD," she says.

Minassian cautions that the relationship between PTSD and heart rate variability does not imply that one necessarily causes the other.

"We're just reporting a relationship at one time. We're getting a better understanding of the disease of PTSD and its relationship to physiological responses, and that could help us in the future learn how to prevent PTSD or even understand who might be more vulnerable to the effects of combat trauma."

As for the four battalions of Marines, they have since returned from their deployments and again were screened for PTSD and had their heart rate tested. Minassian hopes that by comparing the pre- and post-deployment data, her team will be able to shed light on the role heart rate variability plays in how troops respond to combat trauma. The results of that study should be published later in the year.