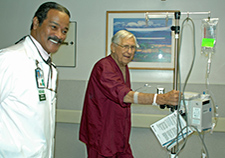 Recreation aide Ural Kincaid walks with Veteran Wyatt Brinkley on a VA inpatient unit as part of the STRIDE Program.

Recreation aide Ural Kincaid walks with Veteran Wyatt Brinkley on a VA inpatient unit as part of the STRIDE Program.

For older patients and those battling chronic illnesses, long-term hospital stays can often lead to undesirable consequences. Many leave the hospital with mobility issues or suffer broken bones and other injuries from falls shortly after their release. This can lead to poorer quality of life, increased burden on caregivers, higher costs, and even death.

"One of the main issues is that studies show patients spend less than 5 percent of their time in the hospital on their feet," says Dr. Nicole Hastings, geriatrician and investigator at the Geriatric Research, Education and Clinical Center, or GRECC, and the Center for Health Services Research at the Durham VA Medical Center in North Carolina. "We know from research on healthy volunteers that people can lose between 10 and 15 percent of muscle mass and strength during 5 to 10 days of bedrest, and for older patients or those with chronic illnesses, they're going to have low reserves to begin with."

Hastings, also an associate professor of medicine at Duke University, set out to address the functional decline older patients sometimes experience during their hospital stays by developing the STRIDE program. A supervised walking program for older Veterans, STRIDE aims to get older Veterans out of their beds and moving during hospitalization.

In a recent study of 127 older Veterans, Hastings found that patients enrolled in STRIDE had shorter hospital stays and were more likely to be discharged to their homes rather than to nursing or rehab facilities. The results have been accepted by the Journal of the American Geriatrics Society and will likely be published later in 2014.

The study, which took place between February and July 2012, included 92 Veterans aged 65 or older who took part in STRIDE, and 35 who did not. Those in the STRIDE program walked for up to 20 minutes per day, often in two 10-minute intervals. After a one-time gait and balance assessment by a physical therapist, patients are accompanied on their daily walks by a therapy assistant.

"Often, after patients go home, they're still so weak that they're not able to do day-to-day activities, and that leads to falls, injuries, and further problems like isolation. If you can't get into your community, go shopping, visit with friends, or go to church, then you become isolated and that can result in mental health problems as well," says Hastings. "The patients we enrolled had an average stay of five or six days, so that was certainly long enough to see some negative impact."

What Hastings and her team did see were shorter hospital stays, by one day on average, for patients in the STRIDE program, and a 92 percent discharge to home rate. By comparison, only 74 percent of those not in the program were discharged to home. The rest went to nursing or rehab facilities.

"Patients want to go home and as soon as it's safe, they should," says Hastings. "The less time they stay in the hospital, the less time they're exposed to hazardous environments and the safer they'll be. Plus it opens up hospital beds for other patients that need them."

The STRIDE program, while currently unique to the Durham VA, is expanding. Hastings is collaborating with the Baltimore GRECC to implement STRIDE at the Baltimore VA. "Since this study we've had over 600 people come through the program," she says. "We've gotten a lot of interest from other VAMCs and distributed a lot of information. Maryland will be the next place to offer STRIDE, but I wouldn't be surprised to see it elsewhere in the near future."