Unit cohesion could be key to PTSD resiliency 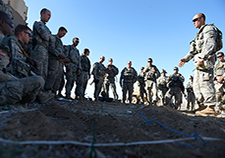 A VA study of nearly 800 National Guard and Reserve troops found that soldiers reporting higher levels of unit cohesion tended to be more resilient to mental health problems, including posttraumatic stress disorder. The results, presented at the American Psychological Association annual meeting in August 2014, could help explain why some soldiers seem more resilient than others to PTSD.

"We defined resiliency as having better mental health function. Veterans should have the ability to fulfill their usual roles and conduct normal activities on a regular basis," said Dr. Lisa McAndrew, a researcher with the VA New Jersey Healthcare System and VA's War Related Illness and Injury Study Center. "What is interesting is that when soldiers come back from combat, most of them are very resilient. They're able to go about their daily lives, but we don't know why that is."

According to VA's National Center for PTSD, between 11 and 20 percent of Iraq and Afghanistan Veterans develop PTSD. Symptoms can include flashbacks, avoidance, negative changes in behavior, and hypervigilance. Treatment often involves long-term therapy aimed at developing coping mechanisms, something McAndrew believes may be more likely to take place informally in soldiers with high unit-cohesion.

"Basically it's almost a natural intervention where soldiers have the support of their fellow military personnel. They can talk to them about their problems almost immediately instead of dealing with them on their own, and that may help them learn strategies to cope during the deployment and afterward," says McAndrew, who is also an assistant professor in the division of counseling psychology at the University at Albany-State University of New York.

As part of their research, McAndrew and her team assessed the mental health and coping methods of 767 soldiers before deployment, immediately upon their return, and then three months and one year later. In addition, the participants were asked to rate three statements about unit cohesion immediately after their return:

The members of my unit are cooperative with each other.

The members of my unit know that they can depend on each other.

The members of my unit stand up for each other.

Scores ranged from 3 to 15, with higher scores indicating higher perceived unit cohesion. The average score was 9.3.

"We hypothesized that participants with higher scores would also have better mental health functions post-deployment," says McAndrew, "and that's what we found." There was also a direct correlation between unit cohesion and more effective coping techniques.

McAndrew believes much of it may have to do with a decrease in avoidance coping—that is, the tendency to avoid or ruminate over a problem rather than address it head on. The alternative, approach coping, tends to require a healthy social network. "Seeking support and advice are part of approach coping," says McAndrew, "and it is generally thought to be more effective in dealing with problems."

"It's not always possible to do 12-week individual interventions, or in the case of National Guard troops or reservists, to even ensure they have the same level of support when they come home that active duty soldiers may have," says McAndrew. "If we can do things to encourage unit cohesion and build relationships within the units, it might be feasible to build resilience to PTSD and other mental illnesses associated with combat trauma."

The next step for McAndrew is to explore whether soldiers who feel understood when they get home are more resilient than those who do not. "It's all about answering these questions," says McAndrew. "If we understand [these factors], then we can help everyone to become resilient."