ORD Home » Currents » Summer2014  »  When to turn it off and tune it out: Current Iraq coverage can increase an...

When to turn it off and tune it out: Current Iraq coverage can increase anxiety, mental health issues among Veterans 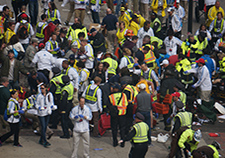 VA research shows that exposure to media images of bombings and other violence can trigger increased PTSD symptoms in Veterans. (Photo by Aaron Tang, via Wikimedia Commons)

VA research shows that exposure to media images of bombings and other violence can trigger increased PTSD symptoms in Veterans. (Photo by Aaron Tang, via Wikimedia Commons )

For a generation of Veterans, the news coming out of Iraq is more than just images and sounds of tragedy; it is a visceral reminder of friends lost, of sacrifices and pain, of dusty patrols and hours of scanning the roadside for any sign of improvised explosive devices.

For these Veterans, the coverage of the escalating sectarian conflict in Iraq is a barrage of memories—one that can have serious negative consequences, according to researchers. From the Oklahoma City bombing in 1995 to the attack on the World Trade Center on Sept. 11, 2001, to the Boston Marathon bombing, research has consistently shown that over-exposure to traumatic events via the media is associated with posttraumatic stress response, higher levels of anxiety, and even physical illness.

One study co-authored by Drs. Mark Miller and Erika Wolf, both of VA's National Center for PTSD, focused primarily on the effects of the Boston Marathon bombing. The team had an ongoing study of Veterans in the Boston area in spring 2013 when a pair of bombs exploded near the finish line of the Boston Marathon. The subsequent manhunt, unprecedented city-wide "shelter in place" order, and firefight that ended with one suspect dead and the other wounded, captured the attention of the world.

"We had Veterans coming in saying they were having increases in PTSD symptoms and that they didn't like watching the news," says Wolf. "It was an understandable reaction to basically being bombarded by trauma in the news. There were similarities between the trauma, with the explosions and the missing limbs that were strongly reminiscent of many of these Veterans' experiences."

Drs. Miller and Wolf set out to identify the psychological effects of the Marathon bombing on local Veterans with diagnosed PTSD. After studying the responses of 71 Boston Veterans, they found that although symptom severity did not change as a result of the bombings when looking at the whole group, many Veterans reported increases in intrusive memories, nightmares, and avoidance. The results were published in the Journal of Traumatic Stress in late 2013.

"There was a lot of variability," says Wolf. "Patients said it made them remember similar injuries to friends or their own trauma, and those were the ones who showed increased symptoms.

Of the study's 71 participants, all of whom had previously screened positive for PTSD, nearly 57 percent met the criteria for PTSD at the time of the bombings. Yet similar studies on the effects of media coverage of the Marathon bombings, the Sandy Hook school shootings, and 9/11 suggest that excess exposure to negative media coverage is associated with acute stress symptoms, even for those without combat experience or PTSD.

Dr. Roxane Cohen Silver, a professor of psychology and social behavior at the University of California, Irvine, believes media coverage can trigger psychological distress even for those not directly affected by the trauma. Drawing from an Internet-based survey of 4,675 people, Silver and colleagues found that those exposed to six or more daily hours of bomb-related media coverage had higher stress levels. In fact, after adjusting for prior stress exposure and mental health, they were three times more likely to have an acute stress response than participants who were directly exposed to the bombings. The results were published in the Proceedings of the National Academy of Sciences in January 2014.

Problem not confined to television

"It looks like it's the repeated exposure," says Silver, "and it is not confined to television. Six hours is above average, but when you include Internet and social media, it adds up fast." In an earlier study on the role of television exposure to 9/11, Silver set the cutoff for daily TV watching at four hours and found similar effects across three years after 9/11. "People acknowledge that it is not a good idea for children to watch these graphic images on the news, but have ignored the effect on adults."

In the case of Iraq Veterans, Wolf recommends counseling for those who are having intrusive or distressing memories, or flashbacks, or who find themselves reliving their combat experiences. For many Veterans, avoidance could be an indicator. "If you're avoiding the news and it's affecting your life and leading to isolation, then you need to talk to a provider. One of the dangers is that people might not know why they're feeling the way they are. Clinicians should also be on the lookout for increased PTSD symptomology."

Meanwhile, Silver has some simple advice: Turn off the television, or at least scale it back.

"I'm not arguing for censorship or limits to people's first amendment rights," says Silver, "but it's important that people are aware of the possible consequences."

She adds: "I understand the argument that people should know what's going on in the world. But it's important to know when to step away. There is just no psychological benefit to repeated exposure to graphic images of horror."