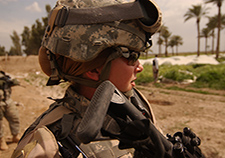 A U.S. Army soldier keeps her weapon at the ready as she provides security during a raid in Al Haswah, Iraq, in 2007. (Photo by Spc. Olanrewaju Akinwunmi)

A U.S. Army soldier keeps her weapon at the ready as she provides security during a raid in Al Haswah, Iraq, in 2007. (Photo by Spc. Olanrewaju Akinwunmi)

In the last decade the Department of Defense has invested heavily in encouraging service members to report sexual assault. A pair of recent VA studies sheds new light on which service members are more likely to report an assault, and on the ramifications of their decisions.

"For many servicewomen, the disadvantages of reporting outweigh the advantages," says Dr. Michelle Mengeling, an investigator with the Center for Comprehensive Access and Delivery Research and Evaluation at the Iowa City VA Health Care System.

Mengeling, whose study was published in the American Journal of Preventative Medicine in July 2014, interviewed 1,339 service members and Veterans. Of these, 205 said they experienced at least one sexual assault during their military service. However, of those, only 51 reported the incident.

"One of their main concerns was confidentiality and the belief that nothing would be done," says Mengeling.

In 2005, DoD launched a second method for reporting sexual assault. Concerned that victims of assault might not reach out for the care they needed because of fear of reprisal, DoD began offering restricted reporting, which allows service members to confidentially report an assault without triggering an investigation.

"It allows them to report to a special response coordinator so they can receive physical or emotional care without the chain of command being notified, and at any time they can transition to an unrestricted report, which would initiate an investigation," says Mengeling, who found that 29 percent of reports in the study were restricted.

Mengeling suggests that a fear of a career-threatening reprisal could be a factor in whether or not to report an assault but that further research was needed.

Participants also expressed a fear of reprisal by their peers and doubt over whether an investigation would accomplish anything.

Another potential issue is how service members might be treated after actually making a report. According to Dr. Margret Bell, a psychologist with the Women's Health Sciences Division of VA's National Center for PTSD, how a victim is treated after reporting has a more significant long-term impact on mental health than does the actual act of reporting.

Bell's study, unlike Mengeling's, focused not just on assault, but on broader sexual harassment experiences during military service.

The study, published online in March 2014 in the Journal of Trauma and Dissociation, looked at what effect the reporting process has had years down the road for more than 1,500 women and men who experienced sexual harassment during their military service. "There has been an emphasis on reporting and how to get victims to report, and for good reason, but it's equally important to understand what happens after they make that report," says Bell. "There's an assumption that making a report will help them and that it's in their personal best interests to do so—but so far, the research has been mixed about whether that's the case, particularly in terms of their mental health."

"We looked at depression, symptoms of posttraumatic stress disorder, and a measure of functioning in the immediate aftermath of the sexual harassment experiences," says Bell. The results showed that 19 percent of participants reported their harassment experiences to authorities. Having made a report wasn't by itself related to mental health outcomes. However, participants who made a report and felt authorities had taken steps to address the harassment reported fewer mental health difficulties. Participants who reported being satisfied with their experiences during the reporting process did best of all.

Because the participants from Bell's study experienced harassment more than a decade ago, the study offered glimpses into the long-term impact of sexual harassment reporting. Says Bell, "It really speaks to the importance of systems responding positively and meaningfully when victims approach them for help."