The VA medical center in Tucson is an adobe-style complex set amid palm trees, cacti, and the blazing Southwest sun. But inside is a brain bank where extreme cold—minus 80 degrees Celsius—keeps specimens well-preserved and ready to be shipped out to research labs throughout VA and worldwide.

The 120 brains currently in the facility were all donated by Veterans who had suffered with ALS, or Lou Gehrig's disease, before their death. They were among more than 2,000 Veterans with ALS who took part in a registry that VA funded from 2003 to 2009.

"This tissue is rare. We provide samples to some of the top ALS investigators in the nation," says Katrina Trevor, PhD, a research pathologist who serves as technical director for the brain bank. Her Tucson VA colleague Stephen Renner, MD, is the lead site investigator for the project. 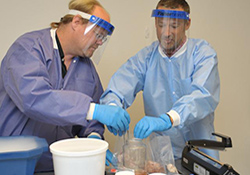 Concerning the Gulf War phase of the project, the researchers have a clear message for interested, eligible Veterans: Sign up now, even if you expect to live another half-century or more.

"This really is a 'living' study, says Christopher Brady, PhD, director of scientific operations for the project. "If you're a Gulf War-era Veteran and you want to help out your fellow Veterans, this is one way to do it."

Brady is a neuropsychologist at the VA Boston Healthcare System and assistant professor of neurology at Boston University. He works closely with the Tucson team, as do his Boston colleagues working on the biorepository: Ann McKee, MD, and Thor Stein, MD, PhD, are neuropathologists, and Neil Kowall, MD, is lead investigator.

Brady explains that the Gulf War biorepository, in addition to collecting tissue from Veterans when they eventually die, will track the health of enrolled Veterans while they are alive, ideally over many decades. That information itself is valuable for research purposes.

"We're extremely interested in finding out all we can about these Veterans while they're living," says Brady. "The tissue that we obtain upon the person's death becomes so much more valuable for research purposes when we know what the person was doing all the years prior to death."

Trevor adds: "The value of any tissue—whether it's the brain, or other organs, and whether the focus is neurological disease, cancer, or any other condition—is having all the clinical and demographic annotation that goes with it. That's what the real value of our bank is, and VA has been very supportive of that."

In addition to completing brief surveys every six months to a year, Veterans who sign up for the Gulf War project agree to have researchers access their VA electronic medical record. 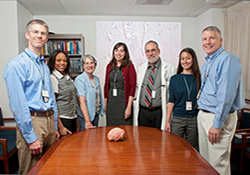 "We get a lot of information from the medical record," says Brady. He stresses that all study data are kept strictly confidential.

"We have access to the records," says Brady, "but once we enter the data into our system, they are completely de-identified. Once it goes into our database, it's all by number. The name is no longer attached to the health information. Any data that get released with a tissue request from a research lab are also de-identified. We are committed to protecting the confidentiality of Veteran's personal health information."

Brady emphasizes that the Gulf War project is not only for those who were deployed to the Gulf in the early 1990s and developed symptoms afterward. It's for any Gulf War-era Veterans, regardless of whether they were deployed, and regardless of their health status since.

The brain bank, which also collects spinal cord tissue, remains open to those with ALS. Unfortunately, their life expectancy is short; most patients with the disease die within five years. The researchers give brief surveys to enrollees with ALS every six months to a year to collect crucial demographic and clinical information while they are still alive.

Some of the information collected from both groups of Veterans is the same. Researchers want to know about health symptoms, medications, military exposures, lifestyle habits, family members' health, and other factors that could help them unravel the mysteries of ALS and GWVI. Is there a genetic connection? Specific toxins that caused the illness? These are among dozens of questions researchers continue to study.

Brady says: "The bottom line is, it's never too soon to sign up. We enroll folks while they're living and follow them through the lifespan. That's what makes this research a notch above a traditional brain bank."