Visitors touring the Nashville VA Medical Center nowadays are likely to be shown the recently spruced up biomedical labs. Mike Walsh, administrative officer for research at the site, says the new lab space is a source of pride for his staff. 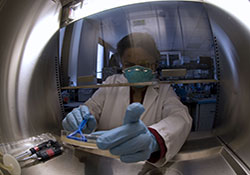 Dr. Suman Laal, a microbiologist, works at the Manhattan campus of the VA NY Harbor Healthcare System. The facility is one of many VA sites nationwide to undergo renovations of its biomedical labs. (Photo by Lamel Hinton)

Dr. Suman Laal, a microbiologist, works at the Manhattan campus of the VA NY Harbor Healthcare System. The facility is one of many VA sites nationwide to undergo renovations of its biomedical labs. (Photo by Lamel Hinton)

"There's an increased sense of pride among our research personnel," says Walsh. "The space has served as a destination during a national architect and engineering conference held in Nashville, and it's been a factor in faculty recruitment. In general it's become a site for other visitors to our health care system to check out."

The renovations—still ongoing at Nashville—are part of a nationwide effort, initiated by Congress in 2006, to review the state of VA biomedical labs and make the necessary improvements. Priority was given to safety hazards and non-working or severely deteriorated systems, but a range of renovations have been made so far at many of the 74 VA sites assessed nationwide, and more are underway or in in the planning stage.

Some sites also have had new construction approved partly as a result of the assessments, which were carried out by three architectural and engineering firms through a contract with VA.

Karen Scott, who oversees the project for VA's Office of Research and Development, notes that like hospital operating rooms, "biomedical research space is very costly to build and maintain according to modern standards." Scott took over the project from Dr. Deanna Robbins, who retired from VA in early 2013.

Scott says that in addition to VA's own standards, and those of the National Institutes of Health—which funds a good chunk of the lab research conducted by VA investigators—there are nearly a dozen other organizations whose safety or technical standards were consulted and followed. They include, for example, the American National Standards Institute, for safety showers and eyewashes; the Illuminating Engineering Society of North America, for lighting levels; and the National Fire Protection Association, for guidance on hospital electrical systems.

Walsh, at the Nashville VA Medical Center, says part of the need for the overhaul stemmed from new trends in how biomedical research is conducted. "There are more collaborations between groups of researchers," he explains, "and increased dependence on IT resources and digital imaging."

The old space at the Nashville VA, he says, was a "series of labs and offices, each with its own door, and each assigned to different PIs [principal investigators] or groups of PIs." Because unused rooms had to be locked for security rooms, he says, and certain equipment was housed in those labs, researchers often had to work around others' schedules to get their work done.

Dr. Donald Rubin, an infectious disease specialist who serves as the associate chief of staff for research at Nashville, expands on Walsh's point about sharing resources. He cites, as an example, the CO2 tanks that service the incubators in which cell cultures are stored for experiments. The special gel that preserves the cells needs just the right acid-base balance in the air, and the extra CO2 does the trick.

In the past, each researcher had his or her own incubators. That meant lots of extra gas tanks to keep around, with the attendant costs and safety concerns. Now, the incubators are shared, thanks to the open floor plan, and far fewer gas tanks are required.

Same with the biological containment hoods. There were 51 in all in the building, pre-renovations. When the work is complete, there'll be about half that amount. A similar story applies to the high-powered electron microscopes that many research groups rely on.

"Ultimately," says Rubin, "this saves the taxpayer from buying items that can be shared, such that more money can go into the actual novel parts of an investigator's research project."

Research Infrastructure Program by the numbers

What types of problems were found?

Below are examples of common deficiencies found in each of the five categories assessed in the Research Infrastructure Program: