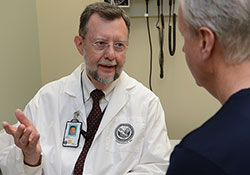 Vitamin E, known for its antioxidant power, helped slow the progression of Alzheimer's disease in Veterans with mild to moderate symptoms in a trial reported Jan. 1 in the Journal of the American Medical Association.

More than 600 Veterans from 14 VA medical centers around the country took part in the VA-sponsored trial. Researchers followed them for up to four years, with an average follow-up of about two years and three months.

Although the disease progressed in all treatment groups, vitamin E slowed the disease by about six months, compared with placebo. In other terms, it slowed the worsening of Alzheimer's disease by almost 20 percent per year, compared against placebo. The main outcome measure was a test of how well the patients could perform activities of daily living.

Lead researcher Maurice Dysken, MD, a geriatric psychiatrist, says a delay of this size in the disease's progression can have a significant impact on quality of life for patients and their family members.

"It could be very meaningful for someone with early Alzheimer's who is still functioning at a high level, and for his or her caregivers, to have a delay of six months in the progression of the disease over about a two-year period," says Dysken. "When the disease has progressed to a severe stage, the benefits of a delay of this size are less apparent."

Dysken is former director of the Geriatric Research, Education, and Clinical Center at the Minneapolis VA Health Care System. He is also a professor of psychiatry at the University of Minnesota.

In the study, his team compared vitamin E against three other treatments: the drug memantine (sold as Namenda), vitamin E plus memantine, or placebo. Vitamin E beat all the other approaches, including the combination treatment. Outcome measures included not only patient's daily function and cognitive health, but also caregiver burden.

In the raw data, caregivers of those on vitamin E reported about two hours less per day of caregiving activity compared against the other three groups. After statistical adjustments, though, the difference remained significant only when the vitamin E group was compared with the memantine group.

According to existing clinical guidelines in VA and other health care systems, memantine is generally used only for more advanced cases of Alzheimer's. It typically provides some temporary slowing of the disease. Evidence for its effectiveness in less severe cases has been lacking. The new VA study supports those guidelines.

All the patients in the study were also on a cholinesterase inhibitor drug. These medications, known by brand names such as Aricept and Razadyne, block an enzyme that breaks down acetylcholine, a brain chemical involved in learning and memory. The drugs are a firstline treatment for Alzheimer's, especially in the mild to moderate stage.

These drugs often have adverse side effects, though, particularly nausea and diarrhea. Based on the new trial results, Dysken says vitamin E is an attractive alternative, in terms of effectiveness. "We would say vitamin E is comparable to any of the existing medications." He notes that it's also less expensive.

Vitamin E supplementation is not without its own risks. Some research has suggested it may slightly increase the risk of death. No such effect was seen in the VA study.

"We looked at that very carefully as we designed the study protocol," says Dysken, "and the patients were monitored very closely throughout the trial." He notes that no patients in the trial, including those with existing heart disease, appeared to do any worse on vitamin E, compared with their peers in the other treatment groups.

Vitamin E is found in a wide variety of foods, including eggs, whole grains, and beef. But Dysken says getting the nutrient from food is unlikely to achieve the same benefits seen in the study.

"We gave patients 2,000 IUs [international units] per day," says Dysken. "That's about 20-fold greater than the dosage commonly found in a multivitamin containing vitamin E. The dose used in the study is pharmacological, as opposed to nutritional. It's really a huge difference."

Vitamin E comes in several forms, including alpha-tocopherol, which has been found to be the most biologically active in humans. The VA study used a synthetic formulation of alpha-tocopherol. Dysken says this was the same agent used in a late 1990s trial that found vitamin E effective in later stages of Alzheimer's. The new VA trial is among the first large studies to show benefits in earlier stages of the disease.

Dysken says there's no evidence to suggest other types of vitamin E supplementsâ€”such as natural, food-based formulations, versus synthetic chemical-derived ones—would have any different impact on Alzheimer's.

According to Dysken and other experts, vitamin E's effects against the brain-ravaging disease are likely due to its antioxidant properties. Researchers in VA and elsewhere are studying a variety of other antioxidants for their effects against Alzheimer's. They include, for example, compounds found in red tea, red grapes, and the spice turmeric.

Dysken says it's still "an open question" as to whether vitamin E is unique in its anti-Alzheimer's properties, or simply one of many antioxidants that could achieve the same effect.

The trial was sponsored by VA's Cooperative Studies Program.