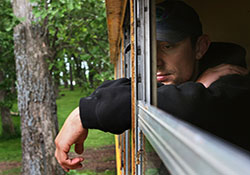 Nick, who served with the Army National Guard, was living in an abandoned school bus near a city park in Freeborn County, Minneapolis, when this image was taken as part of the "Portraits of Home" photo exhibition sponsored by the Greater Minnesota Housing Fund. (Photo by Stormi Greener, used with permission of GMHF)

Nick, who served with the Army National Guard, was living in an abandoned school bus near a city park in Freeborn County, Minneapolis, when this image was taken as part of the "Portraits of Home" photo exhibition sponsored by the Greater Minnesota Housing Fund. (Photo by Stormi Greener, used with permission of GMHF)

Dr. Stefan Kertesz, a physician-researcher at the Birmingham VA Medical Center and the University of Alabama, remembers working with homeless patients before he came to VA. He talks of patients trying to balance their addiction or mental health recovery with their primary care needs. Most tellingly, he remembers the failures.

"I saw homeless patients who left their recovery over disputes over whether their primary care needs were being met," says Kertesz. "These aspects don't need to be in conflict. They shouldn't be in conflict."

The desire to provide better care to patients who are homeless eventually led Kertesz to VA, where he has spearheaded research on providing them with better care. "Primary care isn't typically designed for homeless patients," he says. "With homelessness, the competing demons of getting basic needs stand in the way of medical care. If you don't know where you're going to sleep, it's very hard to think about where you're going to store your insulin."

Kertesz is on the forefront of a movement within VA and health care as a whole to revolutionize homeless care. A major component of that involves developing specialized programs tailored to meet the needs of homeless patients. The work seems to be having an effect. Of the nearly 3.5 million Americans who are homeless on any given night, some 52,000 are Veterans. That number is down from nearly 400,000 two decades ago, says Dr. Thomas O'Toole of the Providence (R.I.) VA Medical Center. O'Toole, like Kertesz, sees the progress as a result of a tailored and integrated approach to homeless care.

"We're not just talking about mental health or houses," he says. "We're talking about having the flexibility in our health care model to meet the challenges they present."

Together, Kertesz and O'Toole offer a kind of one-two punch aimed at knocking out Veteran homelessness. Kertesz' research has focused largely on identifying the specific challenges homeless patients present and in finding ways to address those issues. O'Toole's research, meanwhile, aims to motivate Veterans to seek care in the first place.

As part of their research, Kertesz and his team developed the PCQ-H (Primary Care Quality-Homeless), a survey to gauge patient experiences, coordination of services, and attention to needs. The process involved countless interviews with homeless Veterans, advocates, and experts.

"We reviewed over 1,500 pages of manuscript to figure out what questions we needed to ask," says Kertesz. Most care providers offer off-the-shelf questionnaires, but those documents aren't designed with homeless needs in mind, he says. "We believe this is a better way to assess whether we're meeting the needs of a highly vulnerable population."

Those needs are often as diverse as the patients themselves. Many are coping with physical and mental illness, often including addiction. They often lack access to even the most basic of necessities. Studies have shown that even if they have a caregiver, concerns over trust and respect can derail care. "This is a population that expects to be looked down upon or given less than the full measure of care," says Kertesz. "If issues of trust and respect aren't addressed, the patient might not disclose important information, or choose to disregard what the caregiver tells them."

To gauge the effectiveness of care, Kertesz and his team had homeless patients fill out the PCQ-H at five federally-funded medical facilities. Four of the sites were VA centers. Of the clinics, three offer traditional primary care. The remaining two, a VA site and the Boston Health Care for the Homeless, offer "tailored" services. Those services included in-shelter care, outreach, homeless-focused staff, and access to Veterans' services, food, clothes, and more. "We can't have people choosing between getting a meal and seeing their provider," says O'Toole. "We tried to create a one-stop-shop so that not only are they getting their care, but they're meeting a housing coordinator and a benefits coordinator and laundering their clothes."

Forty-three percent of the 601 participants in Kertesz' study described themselves as in fair to poor health— compared to about 9.6 percent of Americans in the general population. Eighty five percent were male and most were considered chronically homeless.

The investigators discovered that patients rated their care more favorably at the Boston facility than in traditional medical locations. Scores at a tailored VA program with co-located medical and psychiatric care and an emphasis on speedy care, while not as high as at the Boston clinic, were still better than at the traditional VA facilities.

The results of the study, published in the December issue of the American Journal of Public Health , also showed that an unfavorable experience was up to twice as common at traditional medical facilities.

"This is important because when there is not a primary medical care relationship, homeless individuals seek care in uncoordinated ways. They go to the ER, for instance. It becomes difficult to stabilize long term conditions. It's costly, and it doesn't help with any of their other problems," says Kertesz.

O'Toole, who manages a tailored care clinic in Providence, is optimistic about VA's role in treating Veterans who are homeless He points to the 38 homeless patient aligned care teams, or H-PACS, in VA and cites plans to expand to 52 in 2014. Because VA is an integrated health care model, it is able to respond quickly, turning research findings into practice, he says. "We published a paper on tailored homeless care in 2010," he says. "By 2011 we were implementing it as a program.

Both researchers agree tailored care is less about treating a specific illness and more about treating the patient as a whole, regardless of his or her housing situation.

"We need to be providing care to all our Veterans, and that includes homeless Veterans and Veterans struggling with issues beyond just their physical health needs. Ultimately, we need to ensure what we're doing is alongside the broader goal of ending homelessness in Veterans and helping them achieve a level of health that isn't afforded by being homeless."

The December 2013 issue of the American Journal of Public Health includes a supplement devoted entirely to homelessness. The issue, developed with support from VA, includes groundbreaking research, commentaries, and briefs on homelessness.

"There is a public health crisis playing out on the streets of our Nation's communities," write Shaun Donovan, secretary of the U.S. Department of Housing and Urban Development, and Eric Shinseki, secretary of VA, in the issue. "Homeless men and women, many living with disabling conditions, are joining a declining, though still significant, population of what many refer to euphemistically as 'the unsheltered' or 'forgotten' homeless."

"Homeless Veterans—all homeless Americans—must not remain our invisible citizens. What they need are permanent places to live, jobs, education, and quality healthcare," they write.

The issue covers topics ranging from homelessness among children and the elderly, to problems stemming from money management among Iraq and Afghanistan Veterans.