Research: Many Veterans' seizures tied to TBI and PTSD, not epilepsy 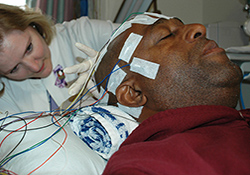 A recent VA surveillance project highlighting the relationship among traumatic brain injury, posttraumatic stress disorder, and seizures indicates that Veterans of Iraq and Afghanistan diagnosed with seizures are more likely to also have suffered TBI, PTSD, or both. The research, conducted by investigators at VA's Southeast Epilepsy Center of Excellence, raises questions about the types of seizures these Veterans are facing and the ways in which they are diagnosed and treated. Patients with seizures are are typically prescribed anti-epileptic drugs, which, while effective for epilepsy, provide little to no benefit for other types of seizures.

VA treated more than 87,000 Veterans with seizures diagnoses during fiscal year 2011. While a relatively small number of those, only 3,792, served in operation Enduring Freedom, Iraqi Freedom, or New Dawn, Veterans diagnosed with seizures from those conflicts were proportionately much more likely to also have TBI than their peers who have not had seizures. Previous research has pegged TBI and PTSD rates as high as 22 percent for Iraq and Afghanistan Veterans. The new study suggests that nearly 70 percent of Veterans with seizures also have TBI and PTSD.

Researchers aren't sure yet what exactly is driving the correlation, but what is clear is that all seizures are not created equal.

According to one of the authors of the study, Dr. Tung Tran, a neurologist at the Durham VA Medical Center in North Carolina, epileptic seizures involve abnormal brainwaves. If the brain were a symphony orchestra, an epileptic seizure would be like one musician playing excessively at the wrong time, potentially throwing the other performers off.

Non-epileptic seizures, on the other hand, are not accompanied by abnormal electrical discharges. These psychogenic non-epileptic seizures, or PNES, may involve uncontrolled movements, fainting spells, or a number of other symptoms that mimic epilepsy in outward appearance, but the cause is different. In other words, the "orchestra" is playing perfectly fine, but something else has gone wrong. Treatment of PNES involves collaboration with mental health specialists.

Testing to determine the type of seizure is notoriously difficult. It often involves monitoring patients with an electroencephalogram (EEG) test for long periods of time. "The goal is to monitor them until they have an episode or two, but that's difficult because it's not something you can control," says Tran.

Testing alone can take upwards of a week, depending on how frequently seizures take place, with much of that time in the hospital or clinic. "[Epileptic and non-epileptic seizures] can look very similar and often, because the medical provider is not able to see the seizure, they have to go by what the patient describes,"says Tran.

Treatment needs to be different

This can lead to Veterans being prescribed anti-epileptic drugs even when their seizures are not epileptic, says Tran. And, while AEDs are useful for treating epilepsy, they do nothing for PNES. In fact, treatment can lead to other problems. "Most medications, and seizure medications in particular can have significant side effects,"says Tran. "Some have long-term effects. They can affect mood and cognition and more. That's the reason we want to be confident as to what kind of seizures someone is having before we put them on medication."

Common side effects of AEDs can include sleep disturbances, confusion, hyperactivity, and behavioral changes. This, says Dr. Aatif Husain, Southeast Epilepsy Center of Excellence regional director, is why the work of VA's 16 Epilepsy Centers of Excellence is so important. Tran and other researchers hope to avoid prescribing potentially harmful drugs, particularly to Veterans already suffering TBI and PTSD.

"We're working on clarifying how we identify patients with epilepsy, because it's not a clear algorithm,"he says. "We're trying to understand what role non-epileptic seizures have because they need to be treated differently. Resources for these patients need to be multidisciplinary. We can't just treat our Veterans with neurologists. Psychologists and other mental health experts are just as important in treating this population."

The study, written by Tran, VA statistician Rizwana Rehman, and Pamela Kelly, the regional administrative director at the Southeast Epilepsy Center of Excellence, was presented at the American Epilepsy Society meeting in December 2013.

The Food and Drug Administration linked anti-epileptic drugs to suicide-related behaviors in 2008. Since then, study results have varied as to the effect AEDs have on suicide risk. Now a recent VA study of more than 90,000 patients shows that, at least in the case of older Veterans, suicide-related behavior actually peaked in the month prior to AED prescription and tapered off after the prescription was received. The findings suggest that contrary to the FDA warning, AEDs may not be responsible for suicidal behaviors.

The study, published in the November 2013 issue of Neurology, focused on the records of 90,263 Veterans aged 65 and older. The Veterans were first prescribed AEDs from 2004 to 2006. Suicide-related behaviors, such as thinking about suicide, injuring oneself, or actually attempting suicide, were assessed via VA inpatient and outpatient data for both the year prior to and after prescription.

The study team, led by Dr. Mary Jo Pugh of the South Texas Veterans Health Care System, found 87 incidents of suicidal thinking or suicide attempts (among 74 people) occurring in the year prior to an AED prescription, and 106 (among 92 people) in the year after. But of the post-prescription incidents, 22 percent of those patients had exhibited the same behavior previously. Overall the study suggests that the rate of suicidal behavior gradually lessened over time.

Pugh's research corresponds with similar studies of antidepressants that also found suicide-related behavior was highest just prior to the onset of treatment. This, the authors write, suggests the behavior is part of a worsening condition that eventually leads to treatment, rather than a result of treatment.

The findings are somewhat limited because the study included only older Veterans and tracked only suicide-related behavior, and not actual suicides. The researchers suggest further studies to more firmly establish what role, if any, AEDs play in suicidal behavior.