The third of four planned trials on treating symptomatic mild traumatic brain injury with hyperbaric oxygen therapy has been completed and supports prior research, with researchers saying there are no statistically or clinically significant benefits to the therapy. 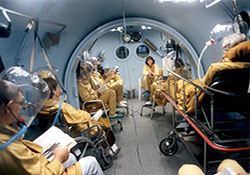 The most recent trial, conducted jointly by the Department of Defense and VA, took place at the Naval Medicine Operational Training Center at Naval Air Station Pensacola in Florida. It involved 60 active duty Marines from Camp Lejeune in North Carolina and from Marine Base Quantico in Virginia. All the Marines in the trial had experienced at least one mild TBI (concussion) over the previous 39 months and had ongoing symptoms associated with the injury. Common symptoms included headaches, dizziness, memory difficulties, and sleep problems.

Over a 10-week period, each Marine underwent 40 one-hour compressions in the hyperbaric chamber. For trial purposes, the researchers used 2.0 times sea level pressure for all 60 subjects and adjusted the mixture of air gases to simulate room air oxygen (about 21 percent oxygen), 1.5 times room air and 2.0 times room air. Each participant underwent standard post-concussion and PTSD testing, in addition to neuropsychological testing, neurologic exams, computerized balance testing, pain questionnaires, and computerized eye tracking evaluation before and after the trial. In the end, researchers found no significant difference in the Marines' scores following the therapy.

Initially developed to treat diving disorders, hyperbaric therapy delivers higher oxygen content, often up to pure oxygen, at elevated pressures to induce healing. It is covered by Medicare for approved conditions—those for which studies have shown clear benefits. But its effectiveness has not been demonstrated in treating brain injuries. A parallel trial, also sponsored by VA and DoD, involving 50 service members in Texas, also failed to show any benefit to the treatment.