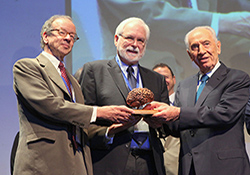 "We are deeply honored to receive this award,"said Donoghue, co-director of the BrainGate team, a researcher at the Providence VA Medical Center, and director of the Brown Institute for Brain Science. "It will support our continued research to help people with paralysis, some of whom cannot speak, to restore their connection to the world around them."

The prize is awarded "for a recent breakthrough in the field of brain technology for the betterment of humanity,"according to a statement by Israel Brain Technologies, a nonprofit organization inspired by Peres that grants the award. The contest's panel of judges—experts in neuroscience and technology, including two Nobel laureates—considered presentations from 10 finalists before selecting BrainGate.

The BrainGate system, now being studied in clinical trials with partners including Massachusetts General Hospital, Stanford University, and Case Western Reserve University, uses a baby aspirin-size device with a grid of 96 tiny electrodes that is implanted in the motor cortex—the part of the brain that controls voluntary hand and arm movements. The electrodes record the activity of neurons. An external computer translates the impulses into commands for robotic arms or other assistive devices.

The co-leader of the BrainGate team, Dr. Leigh Hochberg was not on hand for the presentation in Israel, as he was lecturing at the annual meeting of the American Neurological Association.

"All of us on the BrainGate research team are deeply honored to receive this award,"said Hochberg, an associate professor at Brown, neurologist at Massachusetts General Hospital, and researcher at the Providence VA's Center of Excellence for Neurorestoration and Neurotechnology. "Our team of clinicians, scientists, engineers, and the extraordinary participants in our ongoing pilot clinical trial continue to work every day toward developing a technology that will restore communication, mobility, and independence for people with neurologic disease or injury."