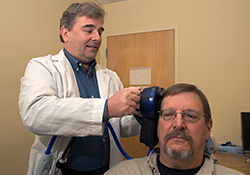 Veteran John Emmons undergoes a TMS treatment with Dr. Robert Folmer as part of a study at the Portland VA Medical Center. (Photo by Michael Moody)

Veteran John Emmons undergoes a TMS treatment with Dr. Robert Folmer as part of a study at the Portland VA Medical Center. (Photo by Michael Moody)

"Sometimes I hear it in both ears, sometimes only in one ear. Sometimes it seems to be right in the middle of my head. It's not predictable."

John Emmons, 67, a retired police officer in Oregon who served as an Army medic in Vietnam, is talking about the tinnitus he has lived with for the past three decades. It keeps him up many a night, and during the day can be a "severe distraction."

Some people with the condition hear whistling. Others hear ringing or buzzing. Emmons says the tone he hears is "hard to describe."

For some it's a mild annoyance—for others, a life-shattering disability.

Regardless of the intensity, tinnitus appears to involve over-active neurons in a part of the brain called the auditory cortex. They light up on MRI brain scans of people with the condition.

That's why VA researcher Dr. Robert Folmer and others believe that a treatment called transcranial magnetic stimulation (TMS) may help. In TMS, clinicians hold a magnetic coil, usually in the form of a figure eight, against the skull. The coil emits repetitive electromagnetic pulses that reach the brain cells under the scalp and change their activity pattern. This, says Folmer, may help reduce the abnormal perception of sounds.

The Food and Drug Administration approved the relatively painless treatment [See editor's note below] for depression a few years ago, and researchers have been studying its use in a variety of other conditions. German researchers first used it with tinnitus about 10 years ago. Folmer is one of the researchers pioneering the therapy in the U.S.

Emmons and some 70 others with tinnitus have taken part so far in a trial of TMS that Folmer is heading at the National Center for Rehabilitative Auditory Research (NCRAR), based at the Portland VA Medical Center. About 100 more patients are expected to enroll. Folmer's group ran a small pilot trial a few years ago that showed promising results, and the new VA-funded trial, he says, is "the largest clinical trial of TMS for tinnitus ever conducted in the U.S."

If successful, TMS would complement other therapies

Volunteers in the study get TMS treatments over 10 days. Folmer says there is evidence the short-term regimen may produce some relief that holds up to six months or more. But his team won't have formal results until all the data are compiled and analyzed. Patients in the study are being followed up to 26 weeks, and Folmer has applied for funding to do longer-term follow-up, up to a year. He and his colleague Dr. Sarah Theodoroff are also seeking funding to do brain imaging to see if the exact anatomy of people's brains affect how they respond to the coil, which must be held over a specific region of the skull to be effective.

One of the strengths of the current trial is that it's placebo-controlled. Some patients are getting real TMS, while others are getting sham treatments, from a coil that makes clicking sounds like the real one but emits lower-intensity pulses.

Folmer says even if TMS proves effective, it would be used along with, and not instead of, other effective treatments already in place. "TMS could augment existing therapies and provide a valuable option for patients who do not respond favorably to other treatments," he says.

Among the other treatments audiologists often recommend are cognitive behavior therapy, mindfulness, self-hypnosis, and relaxation therapy. These approaches can help patients take their mind off the noise in their ears, thus making it less of a distraction and annoyance. Another treatment is sound therapy: Patients wear a small device in the ear that makes white noise to mask the buzzing, ringing, or whistling of the tinnitus, or that makes other soothing or relaxing sounds that can help shift their focus from the troubling sound.

Hearing aids are often useful, as well. Many patients with tinnitus also have significant hearing loss, and amplifying incoming sounds can lessen the perception of the tinnitus.

Emmons is one such patient. His hearing loss likely began during his Vietnam service. "I think the aircraft noise was probably the worst," he says. Then came his years in law enforcement. "You can't believe how loud that siren is when you're inside the car."

The Oregon man shares that toward the end of his career, he would often have trouble hearing radio calls and would have to turn up the volume to hear certain voices. "At the end of a shift, my ears would be buzzing big-time."

His care team at the Portland VA has now recommended he try hearing aids, to help both his hearing and possibly the tinnitus. Says Folmer, "His pattern of hearing loss is typical of someone who has been exposed to loud sounds repeatedly over time."

In VA, clinicians use an approach called progressive tinnitus management, spearheaded a few years ago by the NCRAR's Dr. Jim Henry, to sort out and prioritize treatment options for those complaining of tinnitus. Everyone gets proper assessment. Some then need only basic education. Others need that plus treatment for their hearing loss. A relatively small percentage of patients—those with more intense, disabling tinnitus—end up needing further individualized treatment to deal with the problem.

Emmons says he realized relatively late in life—after developing significant hearing loss and tinnitus—how important it was to protect his hearing.

"At one point, I finally got the idea that to protect what I had was important. So anytime I was around loud noise—on the firing range, for example—I would go to extremes to protect my ears."

At any rate, he says he feels optimistic because of everything he has now been learning from the audiologists at the Portland VA. "My experience there has been very positive—and very encouraging."

Editor's note: The word "relatively" was added to this article on May 13, 2014, after an astute reader pointed out research indicating that while most patients experience TMS as painless, a certain percentage do experience discomfort or even pain. See, for example, this 2009 review study.

Other VA studies on TMS

A handful of VA studies in recent years have tested the benefits of transcranial magnetic stimulation. Here are three that are currently underway: