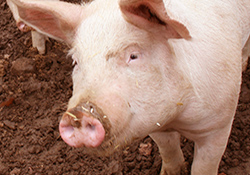 The increasing population of swine raised in densely packed facilities and exposed to antibiotics may raise the risk of drug-resistant germs such as MRSA being transmitted to people, suggests a new VA study. (Photo: ©iStock/BeachcottagePhotography)

The increasing population of swine raised in densely packed facilities and exposed to antibiotics may raise the risk of drug-resistant germs such as MRSA being transmitted to people, suggests a new VA study. (Photo: ©iStock/BeachcottagePhotography)

Veterans who live on or near large hog farms might want to spend a little more time washing their hands, suggests a new VA study. Researchers found that Veterans who lived within one mile of a large hog confinement were nearly three times as likely to test positive for a type of bacteria known as MRSA, or methicillin-resistant Staphylococcus aureus.

The study focused on 1,036 residents who sought treatment at the VA medical center in Iowa City from 2009 through 2011. The participants had their noses swabbed for the presence of MRSA, something all VA facilities do for all incoming patients to guard against the spread of the bacteria.

Tests came back positive for 119 patients, or 7 percent. The rate of infection for those living within one mile of a large hog confinement was nearly triple that of their peers. MRSA infections can quickly become deadly because of its resistance to common antibiotics.

Lead author Dr. Margaret Carrel of the University of Iowa was quick to point out that the bacteria werenâ€™t necessarily making the Veterans sick and that the study did not test for the type of MRSA present. Certain strains are commonly found around hog confinements. Carrel's VA coauthors, including senior author Dr. Eli Perencevich, are with the Center for Comprehensive Access and Delivery Research and Evaluation at the Iowa City VA Health Care System.

The study is expected to generate a response from the livestock industry as well as from advocates who say current livestock practices are unsanitary. Indeed the results are already generating national coverage. Both Wired magazine and the Des-Moines Register have run extensive pieces on the study.

The study is in the February 2014 issue of the journal of Infection Control and Hospital Epidemiology and is available on JSTOR.