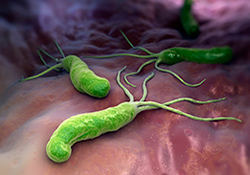 Helicobacter pylori burrow deep within the mucous lining of the stomach and could cause serious gastrointestinal problems. (Photo: ©iStock/iLexx)

Helicobacter pylori burrow deep within the mucous lining of the stomach and could cause serious gastrointestinal problems. (Photo: ©iStock/iLexx)

They aren't visible to the naked eye—and it's a good thing.

Helicobacter pylori are a nasty-looking breed of bacteria, at least the way they appear in pathology textbook illustrations. Picture a slug, but with four or five spaghetti-like tentacles stretching out from the head. The projectiles are what help the bug burrow deep within the mucous lining of the stomach. Nestled within the mucous, it eludes the body's white blood cells and is a tough target for antibiotics.

Lots of people are walking around with H. pylori in their stomachs—about 6 in 10 people worldwide. In the U.S., prevalence varies by age and other demographics, from about 20 to 60 percent. Minorities are more at risk, as are older people.

The bug often appears to not cause any trouble. But according to VA researcher Dr. David Graham, it always causes damage. In some cases, the consequences can be serious: gastritis, ulcers—even cancer of the stomach.

That's why Graham is on a mission. A 30-year veteran of VA, he's been studying H. pylori almost since it was first discovered in the early 1980s and linked to peptic ulcers. Today, says Graham, doctors know it can cause a much wider range of GI problems, but treatment lags behind.

"The current treatment guidelines are out of date," he says flatly.

Graham is a gastroenterologist at the Michael E. DeBakey VA Medical Center and professor at Baylor College of Medicine in Houston.

He says the "triple therapies" that are still the most commonly used in the U.S.—two antibiotics plus an acid-suppressing drug, usually taken for 14 days—should be considered obsolete, because they are no longer effective enough. The problem is drug resistance. Many patients with H. pylori have strains that are now resistant to common antibiotics such as clarithromycin.

"In the U.S. today," he says, "most patients are going to need some form of quadruple therapy," which involves a third antibiotic. "The [triple] therapies they're getting have a cure rate of only 60 to 70 percent."

Meanwhile, most patients are still being told by their internist or gastroenterologist that the triple therapy they are being prescribed has a 90 percent or better cure rate. That may have been the case 15 years ago, says Graham, but no longer.

A cure rate of 90 percent means 9 in 10 patients who do the drug regimen will get entirely rid of the bug. Graham asserts this should be the minimum standard for H. pylori therapy—and that it is attainable. In an article in the February 2014 issue of the journal Clinical Gastroenterology and Hepatology, Graham and two colleagues from National Taiwan University spell out how to do it.

One key is boosting counseling and education for patients, to increase the chance they will adhere tightly to the treatment regimen. Another is taking into account the patient's personal history with antibiotics. And third—perhaps most important—is taking into account local patterns of antibiotic resistance. These vary widely depending on country and region, and the difference can make or break an antibiotic regimen.

Graham acknowledges that using stronger antibiotic regimens—three antibiotics instead of two—does slightly increase the risk of adverse side effects. But he says the drugs are fairly well-tolerated by most patients.

"You'd like to use the fewest drugs you can, for the least time, with the lowest chance of side effects. That's part of optimization. At the same time, you have to get the job done."