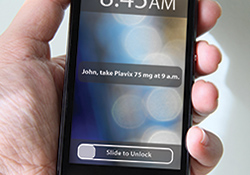 Taking medications after a heart attack is key to a full recovery, but for some patients that's easier said than done. Doctors have long struggled to ensure patients not only remember to take their medicine, but do so correctly. Now a VA researcher has provided glimpse at a possible game-changer: text messages.

According to study lead author Dr. Linda Park, a post-doctoral fellow at the San Francisco VA Medical Center, patients recovering from heart attacks took more of their medication on time when they received text messages reminding them to do so.

"These medications are critical because patients can have serious life-threatening complications if they don't take them," Park explained.

Ninety participants were studied for 30 days. The Veterans, who had all experienced a heart attack, an artery-opening stent procedure, or both, averaged 59 years of age. A third of them received two texts per day reminding them to take their medicine, and offering general heart health tips, three times per week. Another third received only the heart health tips. The last group received no texts at all.

According to Park, just having contact with the Veterans improved the likelihood they would take their medicine. Park's team used an automated system to send out texts at specific times to each Veteran. The texts were sent using technology already in place at most clinics and hospitals.

The results, which appear in the February 2014 issue of Patient Education and Counseling , could lead to similar notification programs for other illnesses.