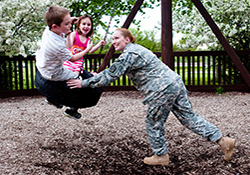 Children with a deployed parent may be at an increased risk for behavioral problems, maltreatment, and substance abuse, according to a review of the literature performed by researchers at the Providence VA Medical Center and Bradley/Hasbro Children's Research Center. The results of the review, which suggest several ways to limit the difficulties children face during and after parental deployments, will be published in an upcoming special issue of Professional Psychology: Research & Practice.

The review systematically examined findings from more than 200 manuscripts to identify any recurring patterns. "There have been many reviews done on the topic, but the only systematic reviews have focused on education. We wanted to comprehensively and rigorously examine the state of the literature in this area," says lead author Dr. Suzannah Creech, a research psychologist with VA and a professor at Brown University. "For children, deployment-separation can bring a sense of fear, anxiety, uncertainty, and absence. Veterans may experience similar worry and an impact to their parenting skills caused by post-deployment health or mental health problems. By understanding exactly what's going on, we can best identify our treatment options for these children and families."

Nearly half of troops have children under 18

Some 1.4 million U.S. children have a parent currently in the military. Put another way, nearly half the nation's soldiers, sailors, airmen, and Marines have children under 18. About a quarter of American's 20 million Veterans have at least one minor child living with them. In a recent report to Congress, the Department of Defense stated that nearly 1 million children have had at least one parent deploy to either Afghanistan or Iraq. "That's an astounding number of children, and given that the hallmark of the wars in Iraq and Afghanistan have been repeated deployments, it's important to know what effect that is having on our youth and to help these families reconnect in healthy ways after the deployments end," says Creech.

For study purposes, Creech defined a deployment as beginning the moment a service member departs for an overseas combat mission. It ends upon his or her return. Reintegration, on the other hand, is less well-defined, starting upon return and extending out for months. Most of the manuscripts measured the impact of deployment on children or parenting in post-9/11 Veteran or military samples. Ten studies described the results of interventions that have been developed to help military and Veteran families.

For the youngest set of children, those under age five, the review found that a number of studies reported increased behavioral and emotional problems during deployment. Among children between 6 and 12 years old, the major problem was anxiety. One study of 116 Army spouses with children between ages 5 and 12 found that 32 percent of the children displayed significant psychosocial problems, particularly when compared with the general population. The length of deployment tended to predict childhood depression, as well as other symptoms.

For teenagers, parental deployment sometimes led to suicidal thoughts, depression, and lower quality of life. The research mirrors findings from surveys of school staff and parents at several military installations, who have reported more emotional and conduct problems among children of deployed parents.

Marijuana and alcohol use also increased among children of a deployed parent. Though reports of binge drinking were above the norm across the board, they were particularly high for children living with a non-parent. Minors staying with other relatives had nearly nine times the odds of binge drinking and seven times the odds of recent marijuana use, compared with other children their age.

Of particular interest to Creech was the relationship between the mental health of the spouse or caregiver looking after the children. "We're not only talking about the direct effect of a service members absence on the child, but also what effect that absence is having on whoever is left behind. Spousal mental health plays a large role in this," says Creech. "How those caregivers are coping can determine how well the children fare."

One examination of nearly 2,000 active Army families showed that rates of emotional or physical abuse were 42 percent higher than average when a parent was deployed. The most common perpetrators were female nonmilitary spouses. A similar study in Texas yielded similar results, pointing to departure and return as particularly risky periods.

Building awareness in the community

Unfortunately the problems don't just clear up when deployments end. Service members themselves may experience difficulty reintegrating into a parenting role, particularly if they struggle with posttraumatic stress, alcohol use, traumatic brain injury, or any number of other widely documented conditions common among returning troops. Some studies have also suggested that depression and PTSD can be related to parenting stress and relationship problems between children and parents after deployment.

"This is an area where we need further emphasis," Creech says. "Mental health doesn't just impact the individual—it can impact the whole family, and the dynamics of the family, in turn, can impact mental health. Our team saw comparatively less research on the impact of post-deployment mental health disorders on children or parenting behaviors."

Though there are a several available counseling options for children, service members, and families regarding deployments, Creech says it all starts with an understanding of military culture and families and raising awareness with schools and community providers who may be the first line of assistance. If providers aren't aware a parent is deployed, or aren't familiar with the stresses, they may not pick up on certain behaviors or conditions. "School and community providers are critical here so it's important that families address their deployment situation proactively, and equally important that providers ask families about military service" notes Creech.

"We know deployments are impacting children," says Creech. "On the other hand, we also have preliminary evidence that post-deployment mental health may impact parenting during and well beyond the reintegration period. We need further research to understand mental health and family functioning during reintegration. By understanding it better, we'll be in a better place to help Veterans and their families."

In recent years, researchers and clinicians with VA, the military, and universities have expanded their work to focus more on issues relating to the families of service members and new Veterans. As a result, several promising programs have emerged for Iraq and Afghanistan Veterans and their families. Here are some examples.

Project Focus. Project FOCUS, which stands for Families Overcoming Under Stress, was designed to promote resiliency in military families who experience a deployment. Parents and children aged 3-17 complete eight sessions dealing with stress, emotion regulation, goal setting, communication, and problem solving. Initial results have been promising, suggesting the program results in reduced child distress and better parent and child emotional health. An online version of the program is available here.

ADAPT. After Deployment Adaptive Parenting Tools Program, or ADAPT, is a 14-week program for Guard and Reserve families with at least one child between 5 and 12 years old who are dealing with a deployment. The program, based on the Parent Management Training - Oregon Model, has been adapted to military culture to assist in emotion regulation and to address family stress related to the deployment. More information on ADAPT is available here.

Resources are also available to military families through on-base services and family-readiness groups. For example, Yellow Ribbon events and Strong Bonds programs offered through the National Guard both emphasize the impact of deployment on family members. Similar services are available through family centers military-wide and through VA and DoD's Parenting for Service Members and Veterans program.