Maintaining the social support of military peers after active duty is associated with better physical health among women Veterans, regardless of whether or not they have posttraumatic stress disorder, say researchers at the VA Puget Sound Health Care Center. Their study appeared online Nov. 6, 2013, in the Journal of Traumatic Stress. 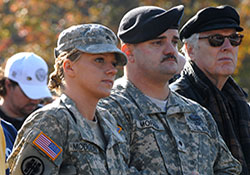 Army Sgt. Danielle Modglin, left, and Spc. Ricky Morris take part in a Veterans Day ceremony in Washington, D.C., in 2008. The Soldiers, who were wounded in Iraq, were recovering at Walter Reed Army Medical Center. Photo by Michael J. Carden

Army Sgt. Danielle Modglin, left, and Spc. Ricky Morris take part in a Veterans Day ceremony in Washington, D.C., in 2008. The Soldiers, who were wounded in Iraq, were recovering at Walter Reed Army Medical Center. Photo by Michael J. Carden

The study involved more than 3,600 women Veterans from across the country. The women, who included Vietnam-era as well as OIF and OEF Veterans, underwent PTSD screening. Seventy percent reported trauma exposure and among those 19 percent screened positive for PTSD.

Among other questions, the researchers asked the Veterans about military social support. Specifically, they asked them how much they agreed with the statement: "You have been able to maintain the social support of your military friends."

That information, in addition to the women's PTSD status, was analyzed against self-reported physical health and the number of times the women had accessed VA care. Screening positive for PTSD was linked to poorer health and more use of health care resources. Greater military social support was associated with better health and less frequent health care utilization. The positive impact of social support was significant regardless of the women's PTSD status.

"This research demonstrates that military social support for women Veterans is a significant predictor of their physical well-being regardless of whether they screened positive or negative for PTSD," said lead author Dr. Keren Lehavot. "It suggests social support is an important protective factor that warrants further investigation."

The study was limited in that Veterans may have misreported hospital visits, trauma, or other information. Furthermore, social support is complex and what holds true for women Veterans might not for male Veterans. For example, one 2013 study found that military peers protected men from mental health issues and civilian support played a larger role among female Marine recruits.

Despite the limitations, the study offers a glimpse into potential red flags as well as possible treatment options to improve overall health among women Veterans.

New VA research has tied the amount of social support patients with chronic illnesses have with a decreased rate of PTSD. In short, adequate peer support can protect chronically ill patients from developing PTSD. The five-year study of 1,024 men and women included 438 Veterans from the San Francisco VA Medical Center and the Palo Alto VA Health Care System. The study was published in the August issue of the American Journal of Public Health.

Researchers measured PTSD in participants via the Computerized Diagnostic Interview Schedule, a computer-based tool for establishing PTSD. A short questionnaire identified social support. It included elements of both material aid and psychological aid. For example, one question asked participants to assume they were moving to a new home. Would anyone be available to help them move? Another question asked if they had someone to share private concerns with.

Of the 667 participants who returned for the five-year follow-up, 88 had PTSD at the start of the study. Another 37 developed it during the course of the research. Participants who responded that they had greater social support were much less likely to develop PTSD, regardless of their age, sex, race, or income.

Good social support results in feelings that the world is safe, or that a person will be taken care of by his or her peers, wrote the researchers. Isolation and avoidance, both of which are tied to PTSD, are also less likely in individuals with adequate social support, according to the study. The researchers say they hope the findings contribute to the development of programs that ensure chronically ill patients receive the social support they need.