Men with heart problems may be at an increased risk of heart attack, stroke, or even death if they are treated with testosterone therapy, a VA study has found. Researchers say the results should provide additional information for patients and their physicians about potential risks, given the booming testosterone trade. 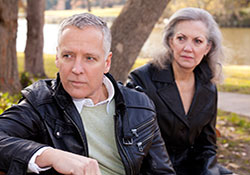 Testosterone therapy is widely advertised as a way to increase libido, improve energy, and sharpen performance for men suffering low testosterone. Sales have tripled over the last decade. In 2011 alone, the U.S. market for testosterone involved 5.3 million prescriptions to the tune of $1.6 billion.

But according to a team led by Dr. Rebecca Vigen, a researcher with VA and the University of Texas and lead author of the VA-sponsored study, Veterans undergoing testosterone therapy had a 29 percent greater risk of death, heart attack, or stroke than those not on the hormone over an average follow-up period of 27.5 months.

The study looked at 8,709 male Veterans with a history of heart problems. The participants all underwent a coronary angiography, a procedure for identifying blockages in the arteries, at a VA facility between 2005 and 2011.

Of the participants, 1,223 patients were started on testosterone therapy in the form of patches, gels, or injections. The researchers monitored the men for more than 27 months. At three years, 26 percent of Veterans who had received testosterone had either died or suffered a heart attack or stroke, compared with 20 percent of those not receiving therapy.

"These findings raise concerns about the potential safety of testosterone therapy," the study authors wrote. They called for future studies to further identify any potential risks, particularly for those already suffering from heart conditions.

Because the men had existing cardiovascular conditions prior to beginning therapy, it is possible that the risks of testosterone therapy highlighted in the study apply more to those already at elevated risk for heart attack. Nevertheless, with the overall popularity of testosterone therapy on the rise, the researchers suggest that Veterans discuss their options with their doctor and weigh the benefits and risks before pursuing the treatment.