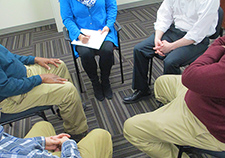 Veterans. The word itself invokes thoughts of honor, service and sacrifice. Unfortunately, since the wars in Iraq and Afghanistan began, another word has become linked with Veterans: suicide.

VA estimated in a 2012 report that nationwide, 22 Veterans kill themselves per day, roughly one per hour. Those numbers are sometimes mistakenly used to refer only to Iraq and Afghanistan Veterans, when in fact the majority of Veterans who die by suicide are over 50 years of age. Regardless, Veterans and current military are at increased risk of suicide when compared to their civilian peers, and the disparity appears to be growing.

While VA, the Department of Defense, and other groups, both private and public, scramble to determine why today's Veterans are at such high risk, experts are also trying to identify practical ways to address the problem. One possible approach, say investigators, is group therapy for those at risk.

"According to Joiner's Interpersonal-Psychological Theory of Suicidal Behavior, suicides are determined by the urge to die and the ability to perform a lethal act," she says. "That urge to die is comprised of two factors: thwarted belongingness and perceived burdensomeness. So if people feel fewer interpersonal connections and reasons for living, and if they feel their personal needs outweigh their contributions to family, friends, and even society, they are drawn to suicide."

The "ability to perform a lethal act" factor ties directly into wartime service, says Johnson. Exposure to the gravely injured or dead, and even to prolonged pain and stress, can dull much of the innate fear around self-injury. What's more, most Veterans are comfortable with firearms, a trait that is particularly noticeable in the number of successful female suicides among Veterans, compared with the civilian population.

Johnson and collaborators Dr. David Jobes, Dr. Stephen O'Connor, and Barbara Kaminer, of the Catholic University of America, Western Kentucky University, and VA, respectively, are in the third and final year of a study into the effectiveness of group therapy at addressing the "urge to die" component of suicidality.

Restoring the will to live

"The idea was that group therapy would provide Veterans with an opportunity to develop relationships while contributing to one another's effort at rehabilitation," says Johnson.

In other words, not only would Veterans build the kind of interpersonal connections that would give them a reason to live, they would begin to feel responsible for one another—rekindling the camaraderie that was ingrained into them through their military service.

While each group has two licensed practitioners as group leaders, members have significant input into their group's norms, rules, and discussions. The conversation, while structured, is flexible and often prompted by common therapeutic questions.

According to Johnson, a simple question like "How have you been doing this week with suicidal thoughts?" can lead to extraordinary results.

Suicide rate of .01 percent among those participating

As of September 2013, 156 Veterans had taken part in the program. Sixteen of the 156 attendees attempted suicide after one or more group sessions. Of these, nine had attended only once and had not fully participated. For example, they might have declined to speak, or worn sunglasses throughout the hour-long program.

Two of the 156 Veterans succeeded in committing suicide, one eight months after last attending the group, the other a year later.

These statistics translated into an overall suicide rate of around .01 percent among those participating in the program.

The results are in line with a recent Danish study that suggested talk therapy was effective in lowering suicide ideation and eventual suicide attempts in patients.

In that study, nearly 5,700 participants who had deliberately harmed themselves—a suicide warning sign—underwent voluntary talk therapy. They were 25 percent less likely to attempt suicide than a comparison group that did not undergo the therapy. The results of that study were published online in The Lancet Psychiatry in January 2015.

Johnson's team is currently analyzing the results of their study and preparing them for publication, but already she believes group therapy has identifiable benefits, not the least of which is an increased ability to reach larger number of Veterans on a lower budget. "These results are encouraging," says Johnson. "There is an undeniable appeal to working with large numbers of suicidal patients at once."

As for the Veterans who take part, the benefits can't be measured in dollars and cents, or in any other quantifiable way. The journal paper includes the following quote from a Veteran participant: "All the words in the world can't explain it. You can't understand unless you feel it, having a group of people who are like me and have gone through what I have gone through."