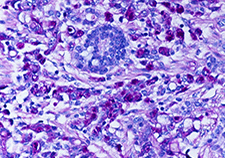 A lab image of a stomach tumor. (Photo: National Library of Medicine)

A lab image of a stomach tumor. (Photo: National Library of Medicine)

Abdominal radiotherapy, long a staple treatment for testicular cancer (TC), may increase a person's risk of developing stomach cancer, according to an international study published Jan. 6, 2015, in the British Journal of Cancer.

The authors found that the greatest risk of stomach cancer involved doses greater than 30 Gy. Gy is a commonly used unit of measure to gauge radiation. A standard X-ray, for example, averages around 0.7 Gy. A CT scan, on the other hand, might measure as high as 14Gy.

"Clinicians should be aware of these excesses when previously irradiated TC survivors present with gastrointestinal symptoms and when any radiotherapy is considered in newly diagnosed TC patients," wrote the authors, among them Dr. Graca Dores, deputy chief of staff at the Oklahoma City VA Medical Center.

Radiation therapy has evolved, but some still at risk

Testicular cancer has one of the highest cure rates of all cancers. The average 10-year survival rate is near 95 percent. If doctors are able to identify and isolate the cancer before it spreads outside the testicles, survival rates jump to 99 percent.

Treatment options typically focus on chemotherapy, surgery, or radiation, although radiation has fallen out of favor in recent years.

"Although the proportion of TC patients receiving radiotherapy has decreased substantially during recent decades, presently up to one third … may receive radiotherapy," the authors wrote.

Modern radiotherapy is also much more targeted and involves lower radiation doses than what was seen in the study.

But that doesn't mean the new findings are moot: Among the men included in the study, stomach cancer diagnosis occurred anywhere from 6 to 33 years after their testicular cancer diagnosis. So those who received radiation therapy even a couple of decades ago could still be at increased risk.

The study population was drawn from a database of more than 22,000 men from six countries, including the U.S., who had been diagnosed with testicular cancer between 1959 and 1987 and had lived at least another five years. The other countries were Canada, Denmark, Finland, Norway, and Sweden.

From this population, the researchers selected 92 patients who had gone to develop stomach cancer, along with 180 "matched controls" who had similar health and demographic traits.

While the majority in both groups underwent radiotherapy, those who eventually came down with stomach cancer tended to receive higher radiation doses. Patients receiving greater than 50 GY were at a 20.5-fold increased risk for stomach cancer, compared with those who received doses less than 10 Gy.

Overall, across all dosages, radiation therapy was associated with a nearly six-fold increased risk in stomach cancer.

"Clinicians and patients should be aware of radiation-related stomach cancer risk," wrote the authors, "and carefully consider the short-and long-term risks and benefits of therapy in their decision making."