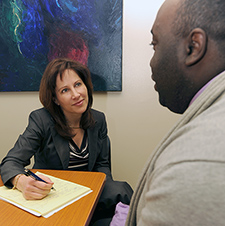 Dr. Kate Chard and colleagues worked with 91 Veterans on a study of how physical battle scars impact mental health. (Photo by Mark Arlinghaus)

Dr. Kate Chard and colleagues worked with 91 Veterans on a study of how physical battle scars impact mental health. (Photo by Mark Arlinghaus)

Veterans with negative body image as a result of injuries sustained in combat are more likely to be depressed and could be at higher risk for posttraumatic stress and other mental illnesses, according to a new VA study. The results, published in Military Medicine in October 2014, could provide insight for therapists and caregivers seeking to help Veterans with their depression.

"Our society, unfortunately, is very image-focused. We give a lot of weight to a person's intellect, personality, or desirability based on their appearance,"says study co-author Dr. Kathleen Chard, acting associate chief of staff for research at the Cincinnati VA Medical Center. "We did not have research on the psychological impact these scars and physical limitations were having, particularly in younger Veterans. They are, in many cases, in the prime of their life. They're dating, seeking jobs, and trying to be physically active."

Battle scars, of course, have been around as long as battles, but the nature of these injuries has changed, says Chard, who is also a professor of psychiatry at the University of Cincinnati. Compared with those who served in previous wars, Iraq and Afghanistan Veterans are at a much higher risk of suffering head or neck injuries, and not just from penetrating wounds like bullets or shrapnel, but from blast and burn injuries.

What's more, improvements to both body armor and medical care mean that many injuries that would have proved fatal in previous wars are now survivable. Veterans are returning home and reintegrating into society, often with significant changes to their appearance, as well as loss of function.

"Most of these individuals are deploying in the best shape of their lives," says Chard, "and in one fell swoop you go from that to something else entirely."

That is not to say that Veterans' perceptions of their appearance are always accurate. Chard, who has worked as a PTSD researcher for more than 20 years, often had trouble even finding scars the Veterans in her study felt were hyper-apparent.

"Often we'd ask them to show us the scar and there were many, many times where I had difficulty finding it, and I'm deliberately looking for it. Meanwhile this Veteran feels like no one will ever find them attractive because of it. It really does highlight the thin line. Their perception of the scar and what is actually there often do not match."

For the study, Chard and her colleagues identified 91 Veterans seeking treatment for PTSD. Of those, 69 had physical injuries related to their service and were given the Dysmorphic Concerns Questionnaire, a measure that identifies body-focused concerns. Thirty-four percent of the Veterans served in Iraq or Afghanistan. Twenty-one percent served in Desert Storm or Shield, and 26 percent served in Vietnam. The rest were post-Vietnam Veterans.

Thirty-three percent of the participants had what Chard describes as "appearance-related injuries," such as marks or scars on the head, stomach, neck, or arms. Not surprisingly, these Veterans scored higher in body-image distress than those who were not injured or did not identify as having appearance-related injuries. They also had higher rates of depression and reported greater PTSD symptom severity.

"It did turn out to play a role in their level of depression, and the trend suggests it could predict PTSD symptoms," says Chard. And, with improvements in body armor and care on the rise, Chard suspects this is an issue more and more Veterans will face, not just today, but in the conflicts of the future.

"If you have a Veteran with an inaccurate perception of their appearance and they're convinced they're ugly, damaged, and that no one will ever love them, that's an important piece of data. The ability to know the self-dialogue going on in their heads, and to identify the perception, right or wrong, about how other people look at them is critical to helping them recover," says Chard.