ORD Home » Currents » Winter2015  » Is it time to change the way we think about cancer?

Is it time to change the way we think about cancer? 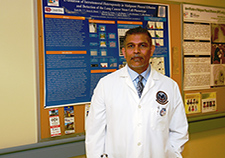 Dr. Raj Batra is a pulmonologist and lung cancer researcher with UCLA and the VA Greater Los Angeles Healthcare System. He is advocating a new approach to cancer based on recognizing the diversity within individual tumors. (Photo by Jeff Russell)

Dr. Raj Batra is a pulmonologist and lung cancer researcher with UCLA and the VA Greater Los Angeles Healthcare System. He is advocating a new approach to cancer based on recognizing the diversity within individual tumors. (Photo by Jeff Russell)

It's been 44 years since the U.S. government declared war on cancer. Is it time for a new weapon—namely, a "cluster bomb?"

That's the analogy Dr. Raj Batra uses for what he envisions as the next generation of therapeutic tools against cancer. "The first thing you have to do is get rid of the mindset that you're going to be able to treat cancer with singly targeted therapies," he says.

A pulmonary physician and cancer researcher with the VA Greater Los Angeles Healthcare System and UCLA, Batra is passionate about what he describes as a "disruptive" new approach. He's done proof-of-concept work on the model, with VA and UCLA collaborators, such as a 2013 study published in the journal PLoS One. Now he hopes to get funding to push the model forward. Meanwhile, he's been taking every chance to write about it and present it to other cancer scientists.

Batra's focus is lung cancer—one of the deadliest forms—but his ideas apply to some other types as well.

In a nutshell, whereas many researchers are working on "smart bomb" drugs that target cancer cells and leave healthy cells intact, Batra believes an array of such bombs—akin to a cluster bomb—is what's needed.

That's because tumors, he points out, are remarkably diverse, even within one person. That mass on a patient's lung X-ray may contain numerous types of cancer cells—each with its own unique DNA.

"Even within a single individual," says Batra, "lung cancer is not a single disease, but multiple diseases. Individual tumors are highly heterogeneous."

So think of a lung tumor—that evil mass in the chest—not as a single-colored blotch, but as a multicolored mosaic. Stopping it means understanding its wide diversity and shutting down all its various engines.

At the same time, Batra says, the varieties of cancer cells within a single patient are not endless. They can be indexed into a finite set of types.

Going back to the color analogy, let's say you want some blue paint for your kid's room. In nature, there are thousands of hues of blue the human eye can perceive. But the nice folks at Sherwin Williams have simplified things so you have to choose only from, say, 50 shades of blue. That's plenty to get the job done.

Same with cancer, according to Batra's model. It's a balancing act. It's about sorting out the rain forest of diversity within individual tumors, but at the same time establishing a practical number of tumor "phenotypes" that capture the bully behaviors of cancer cells that allow them to take over organs like the lung or brain.

He says tumors can show more than 50,000 genetic abnormalities—mutations—they have acquired over a lifetime, compared with adjacent normal tissue from the same person. But it's only the mutations associated with aggressive tumor behavior that Batra cares about.

It is those behaviors that make cancer lethal: spreading, for example, or resisting conventional drugs.

In other words, the phenotypes are based not on how cancer cells look, but how they behave. Which cells are the aggressive ones? And what chemical properties, or biomarkers, are associated with those cells? Those are the molecules that drug developers can target. Block the right combination of signals within the cell, and you effectively stop the cancer.

Batra explains the approach, starting with a tumor specimen removed from a patient, and cultured in a Petri dish: "First you separate the aggressive cells from the non-aggressive cells. [Researchers do that with a technique called "live sorting."] Then you look at the secretome, [all the molecules they secrete], the genome [all their genes], the epigenome [chemicals in the body, partly the result of lifestyle and other environmental influences, that affect DNA], the glycome [all the sugars present], the proteome [the proteins active in the cell], to arrive at common markers of aggressive behavior."

A disease model borrowed from autism

The phenotype idea is used in disorders like autism, and that's where Batra got his initial inspiration. The father of a son with autism, he developed an intense interest in how that condition was studied—and saw the parallels with his own field, cancer.

A phenotype is an observable trait associated with a disease, and it is one that is governed by a relatively small number of genes, or perhaps even one gene. In autism, for example, it might be a certain characteristic defect in facial shape or the size of a particular brain area. In cancer, says Batra, the phenotypes are much easier to distinguish and quantify.

"You can quantify those cellular behaviors with relative ease," he says. "All you have to do is look at the Petri dish, or at the mouse, and you can tell whether tumors are growing, and if so, what's growing more rapidly, and how many different colonies are growing."

In the lab, once Batra identifies the bad actors—the aggressive cell subsets—he uses Venn diagrams, like the ones they teach in grade school, to show areas of commonality. The idea is to get at the shared biomarkers that can be targeted in a combination treatment.

In any given tumor specimen, how do you make sure you're capturing all the aggressive phenotypes lurking in the patient's body? That's where malignant pleural effusions come in. To your average cancer doctor, these are putrid cesspools. To Batra, they're a goldmine.

Cancer that spreads into the space between the lung and chest, known as the pleural cavity, can cause fluid build-up. Not only do the cancer cells themselves secrete fluids, but they plug microscopic drains that would normally allow fluid to escape.

Typically, a thoracic surgeon will stick a needle through the patient's back and drain out the fluid, to relieve pressure on the lung and make breathing easier. A sample of the fluid is examined for tumor cells, to help with diagnosis, but that's where its utility ends. Basically, it becomes medical waste, to be discarded in a red biohazard bag.

Batra points out that these effusions, typically found in advanced disease, are actually a rich resource because they are likely to contain the full spectrum of cancer cell types that have evolved over the cancer's lifetime within the patient, including the noxious ones.

"This 'cesspool' contains the whole repertoire of phenotypes," he says, including "those subsets that are inherently predisposed to tumorigenesis."

So it's off to the Petri dish, where the sorting process begins. Repeat the same process for patient after patient, build the Venn diagrams and compare them, and you start to home in on the biomarkers that should be targeted.

Batra insists that the medical profession needs to break free of old paradigms to win the war on cancer. Meanwhile, he has his own battle to wage, trying to advance his theory in the marketplace of scientific ideas. And a crowded marketplace it is: In January 2015 alone, there were more than 13,000 articles published in the medical literature on cancer.

Batra is optimistic his model will eventually gain traction because he says it satisfies two broad goals at the center of any discussion of health care today. One is what public health experts call the "triple aim": Improve individual patients' experience of health care, and their clinical outcomes; improve the health of entire populations; and drive down cost. The other is what has been called personalized medicine, and is now coming to be known as precision medicine: Customize treatment for the individual based on genetic and biochemical makeup.

"These may seem like hard goals to reconcile, but our approach promises to do just that," says Batra. "What we're looking for is combinatorial treatments that are matched to individual tumors, but that also will work for large numbers of patients who fit that same profile. We just need to carve out the data sets a bit differently, and we'll be able to meet both goals."