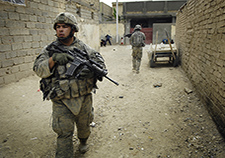 Many among the newest war Veterans, like those before them, are struggling with a web of invisible wounds—beyond the physical scars of combat. Now, a VA research team in Boston has identified a particular combination of mental and behavioral conditions that appears to confer an extra-high risk of disability.

The study involved 255 Iraq and Afghanistan Veterans. They all completed a World Health Organization disability scale that rates difficulty in getting around, communicating and getting along with others, self-care, and other daily tasks.

The overwhelming majority of the Veterans who reported having the greatest difficulties were those with a combination of depression, posttraumatic stress disorder, and military-related traumatic brain injury.

The researchers call this combination the "deployment trauma factor," and it appears to be an especially dangerous triad, from a disability standpoint. It resulted in higher disability scores than any other three-diagnosis combination.

"It turns out that among all the combinations of diagnoses we find, there is one combination in particular that suggests a group of Veterans who are at high risk for long-term disability," says Dr. William Milberg, a psychologist and one of the study authors.

The findings appear in the February 2015 Journal of Traumatic Stress.

Milberg and his coauthors are with VA's Translational Research Center for TBI and Stress Disorders (TRACTS), based at the VA Boston Healthcare System.

The Veterans in the study were all recruited from the Boston area. None had serious medical problems outside of TBI, or severe mental illness, but almost all had at least one psychiatric or behavioral condition. About half had three or more such conditions.

Examining how conditions are linked

The study volunteers are part of a larger group of Iraq and Afghanistan Veterans, about 450 in all, that has been extensively studied by TRACTS researchers, using brain scans, genetic studies, and other means. "This research cohort is one of the largest of its kind," says Milberg.

Dr. Regina McGlinchey, director of TRACTS and senior author on the disability study, says returning Veterans are often coping with multiple health problems, to include mental diagnoses, and it's important to understand the cumulative burden. "These conditions can combine in complex ways to increase disability, and this has been an under-studied area."

In the study, McGlinchey's team saw a clear linkage between certain conditions. For example, Veterans with a history of military TBI were three times more likely to have PTSD than those without TBI. Having a TBI also substantially raised the risk of depression, pain, and sleep disturbances.

Besides the "deployment trauma factor," the team identified three other common factors that appeared to predict disability. One was anxiety conditions other than PTSD. A second was what they called the "somatic factor"—pain along with sleep difficulty. The third was substance abuse or dependence.

Adding to the 'polytrauma clinical triad'

In past work, VA researchers had identified a cluster of conditions they termed the "polytrauma clinical triad"—pain, PTSD, and mild TBI. In a 2009 study, these were the three most common diagnoses found in the medical charts of 340 Iraq and Afghanistan Veterans who had received care at a VA polytrauma center.

McGlinchey notes that this finding "didn't really suggest one way or another how these three diagnoses related to disability, outcome, or treatment."

Milberg says the newest findings suggest that the polytrauma triad "may actually be part of a larger constellation of comorbid conditions. All of these conditions frequently co-occur in this cohort of Veterans, requiring different approaches to treatment than are currently used."

Based on the new data, the deployment trauma factor—depression, PTSD, TBI—appears to be an especially potent and disabling combination. The researchers believe this specific combination of ailments may even be unique in its ability to trigger other health problems, such as insomnia and substance abuse.

Although the TRACTS cohort overall has been studied in great detail, the newest findings require replication with a larger group of Veterans. Only 40 of the 255 Veterans involved in the new report had the deployment trauma factor.

Milberg says a team from TRACTS is now working with Dr. Mark Meterko at the Center for Healthcare Organization and Implementation Research, also at the Boston VA, toward that end. The group is using anonymous medical records from more than 30,000 VA patients who have been screened for mild TBI.

If the findings hold up in the larger study—that is, if a similar proportion of Veterans are shown to have the deployment trauma factor—it would mean "there are hundreds of thousands of service members and Veterans at risk for substantial disability," write the TRACTS researchers.

The implication for the VA health system, says McGlinchey, is that Iraq and Afghanistan Veterans, on the whole, require "highly integrative" treatment approaches.

"This is a complicated population," she says. "We can't treat symptoms in isolation and target one diagnosis at a time, because we know that an ongoing problem in one area can affect rehabilitation therapy in another area. Ideally, we should be providing therapy to address the range of health problems these Veterans face in a comprehensive and coordinated manner.

"In this respect," she adds, "treatment of this generation of veterans might follow some of the models of care that have been developed for geriatric patients, who also often need treatment of multiple medical problems."