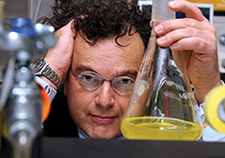 RNA may not be as much a household word as DNA, but it is a critical player in the pathway from DNA to proteins.

A study at the Bronx VA Medical Center and other sites has now shined a spotlight on a certain type of RNA. The researchers say it could serve as a biomarker to help diagnose the two signature injuries of the recent wars in Iraq and Afghanistan: mild traumatic brain injury and posttraumatic stress disorder.

The findings came out online Dec. 5, 2014, in the American Journal of Neurodegenerative Disease.

RNAs that affect other RNAs

The focus is on a group of small nucleolar RNAs—molecules within the cell nucleus that don't directly code for proteins but affect chemical changes to other types of RNA.

"We think we may have an objective biomarker pattern to help identify Veterans with mTBI and PTSD," says brain expert Dr. Giulio Pasinetti, with the Bronx VA and Mount Sinai School of Medicine.

Pasinetti collaborated with VA's War-Related Illness and Injury Study Center in E. Orange, N.J., where 58 Iraq and Afghanistan Veterans were recruited for the study. Some of the Veterans had the combination of TBI and PTSD. Others had only one of the conditions, or neither.

The researchers tested blood samples from all four subgroups. They found differences depending on the presence or absence of TBI and PTSD.

The focus was on four specific RNA molecules, known by the designations ACA48, U35, U55, and U83A. All four were found at significantly lower levels in those Veterans who had TBI plus PTSD, versus those who had only PTSD. In Veterans with PTSD alone, only one of the molecules, U55, was low.

Interestingly, levels of the four RNAs were normal in Veterans who had only TBI, and no PTSD. It was only the combination of the two conditions that appeared to trigger the drop across all four potential biomarkers.

The team also tested the blood of rats exposed to simulated blasts, via a "shock tube" at the Walter Reed Army Institute of Research, as well as the blood of mice that had undergone stress that causes a PTSD-like condition. The rodent results didn't exactly match up with those from the Veterans. Pasinetti says more work is needed to understand the different patterns between humans and the animal models.

Diagnosing the two conditions, especially TBI, is not an exact science. Moreover, some of the symptoms, such as irritability or poor concentration, can overlap. So when the two occur together—which is common in Iraq and Afghanistan Veterans—teasing out the effects of each condition independently, and tracking progress from treatment, can be a complicated affair.

Pasinetti suggests that having a good animal model for each condition is one key to solving the puzzle. That helps researchers separate the distinct biological impact of each ailment.

"Further research using experimental models will allow us to separately evaluate the impacts of TBI versus PTSD, which is not something that is feasible in a clinical setting," says Pasinetti.

Whether through using animal models or conducting other lab work, researchers throughout VA are eager to develop objective, measurable biomarkers in the blood or other tissues—or even in brain waves—that could serve to detect or confirm either of the ailments, or the combination.

Biomarkers could help in clinical trials

The availability of such biomarkers could also provide more precise benchmarks and outcome measures in clinical trials of different TBI or PTSD therapies. Changes in RNA levels, for example, could signal subtle improvement that is not being captured in the short term on standard clinical tests.

Pasinetti says the RNAs could also play a more direct role in treatment. He points out that the RNAs are complex in their actions, but if his team can trace their "downstream" effects and tie them to TBI or PTSD symptoms, those biochemical pathways could become new drug targets.

The Bronx team and their collaborators hope to now put the RNA findings to the test with a larger sample of Veterans.